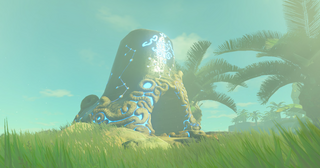 The Qukah Nata Shrine,[1] designated by the Trial name Qukah Nata's Blessing,[1] is an Ancient Shrine in Breath of the Wild.

The Shrine is located atop a hill on the southeast edge of Calora Lake in West Necluda. Link can use the Zora Armor to quickly ascend the nearby waterfall. The Ancient Shrine is initially hidden within a large, rock casing.

Kass can be found on the shore of Calora Lake, playing an accordion. When spoken to, he'll sing an ancient song from the area for Link,[2] which hints that lightning should be called down from sky.[3] This begins the Shrine Quest "A Song of Storms".

In order to break the rock encasing the Shrine, it must be struck with lightning. Link can cause this to happen during a thunder storm either by equipping a metal object and getting struck while on top of the rock or by leaving a metal object to get struck by lightning by itself. A direct lightning strike to the rock will cause it to shatter, revealing the Qukah Nata Shrine.

As Link enters Qukah Nata Shrine, he will be greeted by its Monk, Qukah Nata, who states that he's already proven himself by entering the Shrine.[4]

The interior of Qukah Nata Shrine features no Trial, just a straight path to Qukah Nata. Along this path is a Treasure Chest containing Rubber Tights. When Link approaches the Monk, he will be granted a Spirit Orb for arriving at the Shrine.[5] Qukah Nata wishes Link well before fading away.[6]