The Quiver is a recurring item in the Legend of Zelda series. These items are used for holding arrows, and are usually obtained together with the game's respective bow. The default capacity varies between games. In some games, quivers can be upgraded to Big and Giant Quivers, each allowing Link to hold more arrows than previously. In some games, the existence of a quiver is only implied, and may never actually be seen or made reference to.

Although a quiver does not appear in the game, Link can gain the ability to carry more arrows by throwing Rupees into the Pond of Happiness.

Though a quiver does not appear in the game, Link can gain the ability to carry more arrows by sprinkling Magic Powder on one of the Mad Batter's prisons, found in various locations.

While bows have appeared in earlier games, Ocarina of Time is the first in which quivers are obtained together with the game's bow, the Fairy Bow. There are two quiver upgrades, one that can be won in the Kakariko Village Shooting Gallery and another in the Horseback Archery Range. The Big Quiver allows Link to hold 40 arrows and the Giant Quiver allows Link to hold 50 arrows.

Link receives a quiver together with the Hero's Bow. The two quiver upgrades can be won in the Swamp Shooting Gallery and in the Town Shooting Gallery, located in Southern Swamp and East Clock Town, respectively.

The Hero's Bow and Arrows are acquired in the Tower of the Gods, and allows Link to hold 30 arrows. Quiver upgrades can be obtained by visiting the the Great Fairies at Western Fairy Island and Thorned Fairy Island; the first upgrade increases Link's maximum to 60 arrows, and the second increases it to 99.

Quiver upgrades are available via the Great Fairy hidden in the Royal Valley and Stockwell's store in Hyrule Town. For the final upgrade Link can fuse a Kinstone with a Minish in the Wind Ruins, and a bean sprout will grow into a huge vine leading to a Treasure Chest. With all Quiver upgrades attained, Link's Quiver's capacity can reach 99.

When Link retrieves the Hero's Bow from within the Goron Mines after defeating the dungeon's mini-boss, Dangoro, the basic quiver holds up to 30 arrows. Both upgrades are obtained by by playing the STAR Game in western Hyrule Castle Town; the first time it is completed, Link obtains the Big Quiver, which holds up to 60 arrows. After retrieving the Double Clawshots from the City in the Sky, the STAR Game can be played again at a harder setting. If Link manages to win once more, the prize is the Giant Quiver, which holds 100 arrows.

Ashei is shown to have a Quiver of her own when she appears to aid Link in Hyrule Castle along with the other members of the Resistance.

The first Quiver is obtained in the Temple of Courage and holds 20 arrows. Upgrades can be purchased at any island shop (note: the Bomb Bag, Quiver, and Bombchu Bag upgrades must be purchased one-by-one, in that order, or the next upgrade in the sequence won't become available), or won by setting the High Score at Romanos's Shooting Gallery minigame. The upgraded quivers hold 30 and 50 arrows, in order of procurement. Another note: if the first upgrade has been purchased, the price is 1,000 Rupees; if the game is completed before the purchase, the price is increased to 2,000 Rupees.

The First Quiver is obtained in the Fire Temple and holds 20 arrows. There is an upgrade to the Quiver for sale in the shop in Goron Village for 2,000 Rupees. Another upgrade is obtained in the Pirate Hideout by scoring between 3,000 and 4,000 points after rescuing the Pirates' Prisoner. The first upgrade will allow Link to carry ten more arrows, totaling 30; the second upgrade will allow Link to carry 20 more arrows, totaling 50.

A quiver is found when Link opens the chest containing the Bow, and allows Link to hold up to 20 arrows at any time. After this, additional Small Quivers can be purchased at the Gear Shop in Skyloft's Bazaar, each holding an additional five arrows. A Small Quiver can be upgraded to a Medium Quiver, which holds ten arrows, and then to a Large Quiver, which holds fifteen arrows. Link can carry as many extra quivers as he can fit in his Adventure Pouch. Therefore, the maximum amount of arrows that can be carried is 140, although it wouldn't be sensible to do this as the player wouldn't be able to use shields, potions, etc. 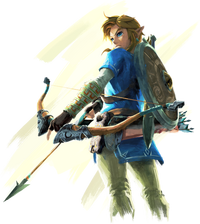 Unlike past titles, Link's quiver is visibly carried on his person, instead of appearing only when obtained or menu screens as seen in past games. The quiver is attached to his waist and only appears on his person when he has a bow equipped. It is automatically unequipped with the bow if it breaks or Link manually unequips it. Link automatically obtains a quiver upon obtaining his first bow, though it is empty and Link must obtain arrows to fill it. Link's quiver does not appear in his inventory and is only seen on his person which is the opposite of how Quivers were depicted before Breath of the Wild. Link can carry various different types of arrows in his quiver such as Arrows, Ancient Arrows, Bomb Arrows, Fire Arrows, Ice Arrows, Light Arrows, and Shock Arrows with each type having its own ammo. Link can access his Quiver inventory via the Bow and Arrow section of the inventory screen or by pressing the Use Bow & Arrow button and left on the Change Weapon button which open the quick select menu for Arrows. There are no quiver upgrades in Breath of the Wild, though this is not a problem as the quiver already has a large capacity to begin with much like his Wallet.

The Sheikah Rola's arrow shop in Kakariko Village is named "The Curious Quiver" due to its status as an arrow shop that sells Arrows and Fire Arrows to fill the quivers of its customers. Rola herself is the estranged wife of the Sheikah archer Cado whom despite carrying a Phrenic Bow is not depicted carrying a Quiver as he has his Eightfold Blade sheathed to his waist instead.

Retrieved from "https://zelda.fandom.com/wiki/Quiver?oldid=539028"
Community content is available under CC-BY-SA unless otherwise noted.