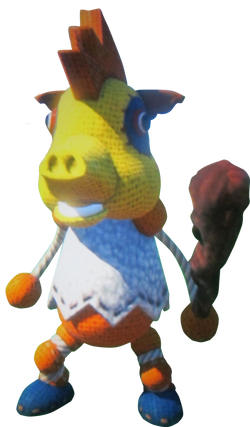 Quick Moblins appear in Nintendo Land's Battle Quest mode. Quick Moblins are distinguished from other Moblins by their leaner physique and crests of orange fur. They commonly appear in groups and charge at Link at high speed, leaping to attack with their clubs one after another. They are famed for their speed and must be dealt with carefully by either defending and retaliating or striking them down as they charge, but they are otherwise not particularly strong, easily defeated with a single strike. They can appear in any type of region, but are more common in later stages, commonly seen on mountains and in dungeon areas. They often aim to surprise the player by running around corners so that they cannot be seen coming. They are said to menace travelers.

A depiction of a Quick Moblin can also be obtained as a Prize for the Nintendo Land Plaza, as are other enemies and objects in Battle Quest. When interacted with, it will fall backwards (as if blocked by a shield) and leap back up and make a squeal, while Monita will comment on its characteristics.