Quest for the Potion of Power

"Quest for the Potion of Power" 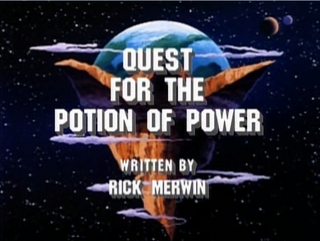 "Quest for the Potion of Power" is the sixteenth episode of Captain N: The Game Master. It was first broadcast in the United States on September 8, 1990.

The episode begins in Rauru Town, where the citizens are enjoying a beautiful day until Moblins appear and cause the townsfolk to go into hiding. Princess Zelda then calls the Palace of Power for help, [1] requesting that Captain N, also known as Kevin, go to Hyrule.[2] Upon Kevin's arrival, Zelda and Link explain that someone is trying to revive Ganon using a special potion found somewhere in Rauru Town, and they ask for Kevin's help so that they may find it first before it falls into the wrong hands.[3] Meanwhile, Mother Brain commands her two minions, King Hippo and Eggplant Wizard, to follow Captain N and retrieve the Potion of Power.[4]

Meanwhile, Link, Zelda, Kevin, Game Boy and Duke arrive to a deserted Rauru Town. They then see a woman walking, and although they ask her for help in finding the potion, the woman nervously exclaims that she knows nothing and runs away.[5] A few seconds later, however, they hear her scream and find that a Moblin is also interrogating the woman about the potion.[6] After Link, Zelda and Kevin defeat all of the Moblins, Link approaches the Moblin leader to defeat him, but the woman's son gets in the way and the Moblin leader holds him hostage, commanding the heroes that they drop their weapons.[7] Link and Zelda obey, but Kevin hesitates to drop his Zapper until the Moblin singles him out, at which point Kevin throws it in front of him. As the Moblin is distracted, Kevin throws a blanket on top of the monster, allowing the kid to escape and giving Link a chance to zap the Moblin. The woman thanks Kevin for saving her son and gives him a map to the Parapa Palace, where they will find the Golden Key that reveals the path to the Potion of Power.[8]

After a short fight against a Geldarm in the Parapa Desert, the heroes arrive to the palace, encountering foes like Wosu, Stalfos, and a Guma. Eventually they reach an elevator that takes them to the chamber where the Golden Key is located. Link shatters the glass that was covering the key and another map, causing the room to shake and reveal that Horsehead is the guardian of the Golden Key.[9] Link, who had been getting jealous of Kevin's great fighting abilities, decides to fight Horsehead alone, but he is easily bested by the monster and loses his sword shortly after, leaving him defenseless. Just as Horsehead is about to deliver a deadly blow to Link,[10] Kevin rescues Link and defeats Horsehead instead.[11] Link, humiliated, goes to pick up his sword and then reads the map he had found along with the key, finding out that their destination is the Island Palace.[12] To arrive to the tunnel, the group crosses a Moa-infested graveyard, and after fighting a few of the flying monsters, Link accidentally falls into a hole, which is actually a secret tunnel leading to the Island Palace. Kevin, Zelda and the rest jump down and join the hero to continue on their way.

Once the group has a small confrontation with a palace monster, Game Boy finds a Bottle of Magic, which Kevin stores away. Link then finds the door for the Golden Key,[13] and upon opening it, they find a room full of statues. As the heroes walk through the newfound room, they eventually find a pedestal holding the Potion of Power,[14] but just then, an Iron Knuckle riding a horse confronts them and reveals to be the guardian of the Potion of Power.[15] While Link and Kevin are arguing on how to defeat the Iron Knuckle, King Hippo and Eggplant Wizard steal the Potion of Power and promptly escape the palace.[16] However, before the heroes have a chance to stop them, the Iron Knuckle grabs Zelda, and Link realizes that he must fight alongside Kevin to be able to defeat the armored foe.[17] Together, Link and Kevin fire at the Iron Knuckle, causing its horse to disappear and giving Zelda a chance to free herself. The three heroes then shoot at the Iron Knuckle one more time to finally defeat it.

Outside, King Hippo and Egpglant Wizard have already crossed a bridge connecting the palace to the shore, and just then, part of it collapses. Link, realizing that they will not be able to catch up them, apologizes for his behavior earlier and accepts to work with Kevin.[18] Kevin then tells Game Boy to go to the palace and bring back the rest of the N Team while the heroes head to where Ganon is located.[19] Just as Ganon is about to drink the potion, Zelda, Link, and the rest of the N Team arrive to try and stop him, but Ganon swallows its contents and transforms into a bigger, stronger, more grotesque-looking pig. Kevin tries to shoot Ganon with his Zapper but to no effect, and Link indirectly tells him to pour the Bottle of Magic onto his Magical Shield.[20] After Ganon once again increases his size to become a monster of epic proportions, he shoots a fire beam at Link in hopes of defeating him, but Link uses his shield to reflect the spell back at the evil wizard, instantly defeating it. The episode ends with Link, Zelda, and the N Team celebrating their victory.