Queen of the Zora

"The dark ones... They raided this village and, as a message to my people, executed me before them. Young man... You who takes the form of a proud beast... I have something to ask of you."
— Queen Rutela

Queen Rutela is a character from The Legend of Zelda: Twilight Princess. Her husband was King Zora, one of the many to hold this title. She also has a son, Prince Ralis. She ruled as queen of the Zora until she was executed in front of her own people as a message to those who may oppose Zant. She wears a pendant that resembles the Zora's Sapphire, as does her son. Interestingly, she is one of the few characters in the game to recognize Link in his wolf form. Her theme is a slightly altered version of the "Serenade of Water" from The Legend of Zelda: Ocarina of Time.

After Link restores the source of water at Zora's Domain, the ghost of Queen Rutela appears before Link. She thanks him for saving her people and requests that he aid her son, Prince Ralis, and ensure his safety. Link finds the Zora prince in Telma's bar in Hyrule Castle Town; however, he has fallen ill. Ilia was said to have found him, collapsed in the street, and brought him to the bar. Telma takes Prince Ralis to Kakariko Village, where a healer by the name of Renado resides. Along the way, Link protects their caravan against enemy attacks.

Once at Kakariko Village, Prince Ralis is taken safely to Renado, and Rutela appears before Link once more to thank him for rescuing her son. She then shows him the way to the hidden Zora tomb behind the graveyard, where Link finds the Zora Armor, a special suit of armor made from the scales of fallen Zora, that allows him to breathe underwater, by extent allowing him to enter the Lakebed Temple. After recovering, Prince Ralis explains that Queen Rutela also appeared to him, informing him about Link's appearance and deeds.

In the ending credits, Queen Rutela can be seen watching over her people and her son, Ralis.

Interestingly, she is the second deceased female Zora to appear as a Ghost in The Legend of Zelda series (the first being Laruto from The Wind Waker).

Queen Rutela's name is likely a reference to Princess Ruto from Ocarina of Time. 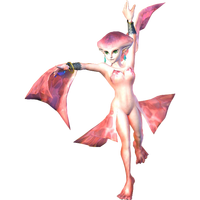 Though Queen Rutela does not appear herself, Princess Ruto's unlockable Standard Outfit (Twilight) is a Queen Rutela Recolor.

Retrieved from "https://zelda.fandom.com/wiki/Queen_Rutela?oldid=543279"
Community content is available under CC-BY-SA unless otherwise noted.