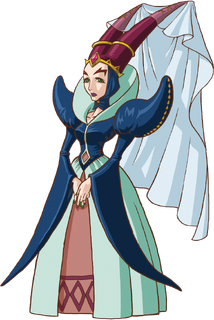 Queen Ambi is a recurring character in The Legend of Zelda series.[2]

Back when Lynna City was merely a Village, Ambi was the ruling Queen of Labrynna. She was known by her subjects as a fair and just ruler, until the day Veran, in the guise of Nayru, appeared with her sinister plan.

The Fall of the Queen

The very same day in which Veran arrived, she seduced Queen Ambi, convincing her that if she built her tower, then known as Ambi's Tower, to the heavens, she would go down in history as the greatest queen ever. Falling for Veran's persuading lies, Ambi decreed every man in Lynna Village was to go to work and build her tower, with the secret help of the endless day Veran could create, using the powers of Nayru. Knowing her control over Queen Ambi, Veran had Ambi send those closest to her away, so that there was no chance of a power loss.

As Veran learnt of the Mystery Seeds which grew in the past, she used her influence to convince Ambi to offer a reward to the person who brought her the seeds. Ambi did so, and it wasn't long before Link himself brought the Mystery Seeds to Queen Ambi. This meeting would be the only one that she and Link would have, before Link's rescue of Nayru. Rewarding Link with Bombs, Queen Ambi almost immediately sent Link away again.

It was only later, when Ambi left the palace for unspecified reasons (presumably to inspect the construction of the Black Tower), that Link would attempt to rescue Nayru. By the time Ambi returned, Nayru had recently been freed. However, Veran was far from defeated, and immediately possessed the body of Queen Ambi. After failing to capture Nayru, Link and Ralph, Veran, using Queen Ambi's influence, now pushed the town harder than ever before, to get what was now called the Black Tower complete. As the tower reached completion, Veran was able to use Ambi's body now to control time, although to a slightly lesser extent than Nayru.

Before Link could arrive to face Veran, Ralph came, prepared to kill his ancestor and sacrifice himself for the good of Labrynna. However, he was easily overwhelmed, just as Link arrived, possibly saving his life. After a brief fight, Veran was defeated, and Ambi was freed, immediately fleeing before the next phase.

After the lengthy battle with the rest of Veran's forms, Link, Nayru and Ralph left the Black Tower behind, only to come face-to-face with Ambi and a group of her knights. However, Ambi reveals that she had not come to fight, but to help free Link, and fight Veran.

After Link, Nayru and Ralph returned to the present, they were shocked to see a statue of Link not only near the Maku Tree, but in the middle of Lynna City as well, built by order of Queen Ambi, who had returned to being a kind queen, beloved by her people.

The Captain and the Queen

In a linked Oracle of Seasons, Ambi can be found in Holodrum, sent on a journey by Nayru to see other times and locations.[3] Link can find her at the Sunken City and the Eastern Coast near the entrance to the Samasa Desert. She is quite taken with the Sunken City, and ponders making her palace sunken as well.[4]

Upon Link returning the Pirate's Bell to him, Ambi arrives at the quarters in Subrosia and it is revealed the pirate Cap'n is her long lost lover. Though they are happy to be reunited after so many years,[5] Ambi understands he is a man of the sea and cannot stay with her, but vows to always wait for his return.[6]

In the Oracle of Ages manga by Akira Himekawa, Queen Ambi is first mentioned by an old man who explains to Link Ambi's sudden decision to construct a tower.[7] She is first shown speaking to Sir Raven with Nayru, who is possessed by Veran, at her side. Queen Ambi thanks Raven for capturing Link, claiming that protecting the tower is the same as defending her.[8] A possessed Nayru then tells Ambi that Link should be executed for treason, as he refused to build the tower and attempted to proclaim the truth about Ambi.[9] Sir Raven suggests a lesser punishment should be served,[10] although he is silenced by Nayru.[11] Queen Ambi then exclaims that Link should be killed immediately.[12] The possessed Oracle of Ages tells Ambi that when her tower reaches the sky, Labrynna's power will be shown and she will be remembered in Labrynna's history forever.[13] Rejoicing in this promise, Queen Ambi orders for all to work on the tower without ceasing.[14]

When Sir Raven is captured, Queen Ambi orders his execution,[15] but Link and Ralph arrive to rescue the knight. Link gives Queen Ambi a locket housing her photograph,[16] explaining that he and Ralph met a Cap'n who used to be a knight. He then passes on the Cap'n's message that he will love her for eternity.[17] Queen Ambi reveals her purpose for building the tower was so the Cap'n would see it and never forget her.[18] She claims the tower is no longer necessary, as she understands his feelings.[19] She then thanks Link for opening her eyes to her tyranny, canceling the tower's construction and Sir Raven's execution.[20] Enraged at Queen Ambi's decision, Veran leaves Nayru and instead possesses Ambi,[21] ordering the guards to arrest Link, Ralph and Sir Raven.[22] Nayru awakens shortly and transports the group to modern day Labrynna. After forming a plan, they return. Nayru tells Link that Roperi's plant is a young Mystery Tree, which produces the needed Mystery Seeds to defeat Veran.[23] Despite this, Ralph decides to confront Queen Ambi and kill her in an attempt to end Veran. Nayru then reveals Ralph's relation to Queen Ambi, explaining that if Ambi is killed, Ralph will cease to exist.[24] Nayru speeds the Mystery Tree's growth, giving the seed to Sir Raven and Link. Link launches the seed at Queen Ambi, causing her to fall unconscious, with Veran forced away from her host.[25] As Veran attacks Link, Sir Raven carries Queen Ambi out of the tower.[26] When Ganon is resurrected despite Link's efforts, Queen Ambi leads her army to assist the hero.[27] Once the demon is destroyed, Queen Ambi asks Sir Raven to stay in her kingdom as a knight and Raven responds by kneeling before her.[28] She proclaims that Labrynna will become a new country where everyone is happy as Labrynna's inhabitants cheer for their ruler.[29][30] Link bids farewell and Queen Ambi says that their departure brings Labrynna sorrow.[31][32]