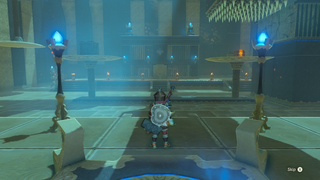 The Qua Raym Shrine,[1] designated by the Trial name A Balanced Approach,[1] is an Ancient Shrine in Breath of the Wild.

The Qua Raym Shrine is located on an islet in Goronbi Lake in western Eldin. The Ancient Shrine can be reached by making a bridge using the Magnesis Rune to manipulate the iron crates and drop them into the lava. Alternately, Link can glide to it with the Paraglider from a higher elevation. As Link enters the Ancient Shrine, he is greeted by its Monk, Qua Raym.[2]

The Qua Raym Shrine consists of a single chamber with two sets of large scales. The adjacent scales are connected in that the other will raise if more weight is applied to the other, and vice versa. Across from the scales is a locked cell where three steel blocks are kept.

On a raised level above one set of scales awaits the Monk Qua Raym, whose platform is blocked by a stack of bombable blocks that can only be reached by raising the scale next to them. This scale in turn has a spiked ceiling directly above it. Link's main objective is to manipulate the two scales to reach the bombable blocks and finally the Monk, but while also avoiding the spiked ceiling.

The scales leading to Qua Raym are initially halfway raised. The left scale holds a wooden crate that can be burned away, by lighting an Arrow on fire from one of the torches. Removing this weight drops the adjacent scale closest to Qua Raym, which holds two barrels and a Treasure Chest containing a Small Key. This Key is used to open the cell with the three steel blocks, which can then be carried using Magnesis and used to manipulate the scales.

To blast away the bombable blocks, Link must place a Remote Bomb on the closest scale and then place a steel block on the other scale, thereby raising the Bomb close enough to destroy the blocks. The spiked ceiling above this scale prevents Link from simply riding it to Qua Raym, requiring that he place one steel block on this scale to keep it from pressing against the ceiling, and the other two blocks on the adjacent scale to raise the other.

Upon approaching Qua Raym, the Monk will give Link a Spirit Orb for completing the Trial,[3] and will wish Link well before fading away.[4]

The other set of scales lead to a another Treasure Chest on a raised level. As with the other two scales, they can be ridden by placing enough weight on them to raise Link to the Chest. It contains a Knight's Claymore.