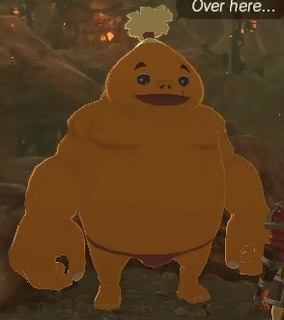 Pyle is a character in Breath of the Wild.[1]

Pyle is a Goron who lives in Goron City. Pyle stands near the western entrance of the City and directs travelers to the Armor shop Ripped and Shredded,[2] which sells the fireproof Fireproof Armor. Pyle explains that ever since the Divine Beast Vah Rudania appeared, the climate has grown hotter and the shop has started selling the Fireproof Armor in response.[3] He adds that he used to be a miner at Death Mountain, but was laid off when Vah Rudania's emergence forced the mining company to move and to cut down its employees.[4][5] After Vah Rudania is freed from Calamity Ganon's control, Pyle jokingly makes fun of it and wants to start mining again at Death Mountain Summit.[6][7]

Link can also ask Pyle general questions about the area. He can be asked for directions to Bludo, the Goron boss of the City.[8]