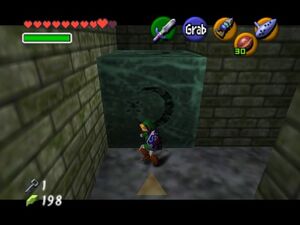 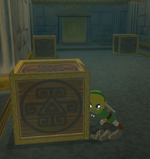 The Block Puzzle involves moving Block(s) into a certain position, or the rearranging of blocks to form a picture. This may be to press a switch, or to create a step which can be used to gain high ground, etc. The Poe Sister, Amy, from the Forest Temple in Ocarina of Time incorporates the block-picture approach in her defeat. A variation of this puzzle, as seen in Oracle of Ages, is to push a block in a way that a certain color is on top, and the block itself in a hole, igniting a flame.

The Enemy Puzzle puzzle involves a room or area in which one or several enemies must be defeated to move on. In The Legend of Zelda series, this puzzle takes three forms: the multi-pronged strike, the miniboss puzzle, and the boss puzzle.

Link against a mini-boss Darknut in Twilight Princess

One of the most commonly reccurring puzzles is the Return Puzzle, a puzzle in which a player must leave a room and return later with an extra item or key, making that room passable. The return puzzle most often exists in dungeon rooms with many exits.

Link pressing down a Floor Switch

Switches in the form of levers and buttons are prevalent in the series.

The Target Puzzle, simply involves shooting a certain switch to open a door. For example, shooting a golden eye above a door, with a projectile, can open that door. Sometimes the target moves, or Link is on a moving platform, making this puzzle more difficult.

Note: The Hookshot, Clawshot, and other similar items do not work when it comes to target puzzles, as they are not true projectile weapons.

The Torch Puzzle involves the lighting of one or more torches by fire in order to receive access to another room, treasure chest, or the like.