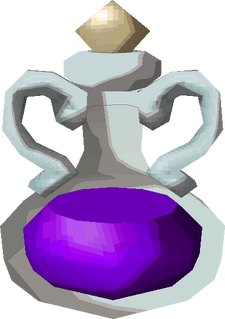 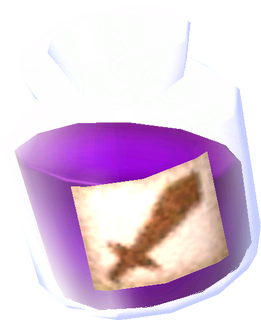 Secret Medicine
Magic Potion
Purple Potions are recurring Potions in The Legend of Zelda series.[1] It has various different uses depending on the game; ranging from replenishing Link's health or attacking enemies.

In A Link Between Worlds, the Purple Potion is instead used to damage enemies, making it the first Potion in a Zelda game that behaves like this. Whenever Link drinks a Bottle of Purple Potion, he lets out an attack that damages all enemies in the immediate area.[3] Link can buy a dose of the Purple Potion from the Witch's House for 60 Rupees. As an added cost, Link must also supply the Witch with ten Monster Guts in order for her to brew it, as well have an empty Bottle to store it in.

As a usable item that is stored in the inventory, it can also be used by Shadow Link and Gramps in the Shadow Link Battles. If either one of them uses a Purple Potion in Hero Mode, it becomes quite possibly the most devastating attack in the series, capable of dealing 32 Hearts worth of damage.

In Hyrule Warriors, Purple Potions appear as the level 2 equivalent of the Bottled Potion items that Warriors take with them into battle, following the Red Potion. It is unlocked after obtaining two Illustration Pieces by slaying Gold Skulltulas, and restores five Hearts and half of a Special Attack Gauge. Like other Potions brought into battle, it is automatically refilled for the next battle.