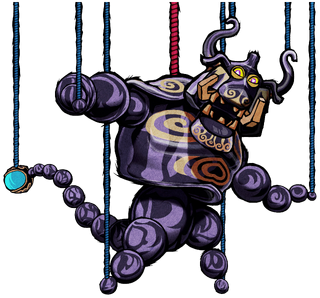 Puppet Ganon is a Boss in The Wind Waker.[1] The three-stage battle is a precursor to the finale with Ganondorf atop Ganon's Tower.

Puppet Ganon's first form, Humanoid Boar,[2] is reminiscent of Ganon's boar-like beast form. Puppet Ganon's movement is restricted; his appendages hang from the ceiling by cords. Puppet Ganon damages Link by spinning his tail and flailing his arms, and by releasing Keese as a distraction. Link can cut the cords with the Boomerang, similar to the battle with Kalle Demos in the Forest Haven. After Link cuts all blue cords attached to Puppet Ganon, he hangs suspended on the central red cord, dragging the ground. To damage Puppet Ganon, Link must shoot a Light Arrow at the blue ball at the end of Puppet Ganon's tail to damage him. However, the blue ball is always revealed to Link, so cutting the cords is not required. After three hits, Puppet Ganon changes form.

Puppet Ganon's second form, Bug-Ganon,[3] resembles a large spider; he flies up to the top of the room periodically, spinning rapidly before crashing back down above Link's latest position. While in the air, Link can use the shallow water in the room as a mirror to see where Puppet Ganon will fall. Once again, Link must shoot a Light Arrow at the blue ball on Puppet Ganon's body to damage him. After three hits, Puppet Ganon changes form again.

The final form of Puppet Ganon, Worm,[4] is reminiscent of the many iterations of Moldorm throughout the series. Puppet Ganon moves erratically around the room, gaining speed each time Link strikes the blue ball at the end of his tail with a Light Arrow. Puppet Ganon is stunned whenever Link attacks his face with the Master Sword, Bombs, or the Skull Hammer, and becomes distracted at the sight of All-Purpose Bait. When the bait is thrown, Puppet Ganon quickly moves towards it, damaging Link if he is in the way. Link may best Puppet Ganon if he uses the Hookshot to reach high platforms in the room. With this method, Link may shoot Puppet Ganons without fear of damage.

After three hits to this form, Puppet Ganon is defeated. After defeating the final form of Puppet Ganon, Link climbs the room's central cord to the tower's rooftop; it is here that he faces Ganondorf for the final time.