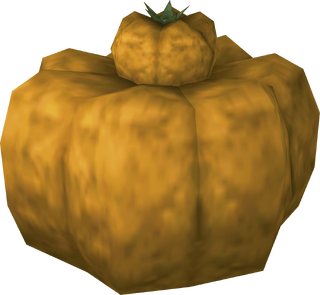 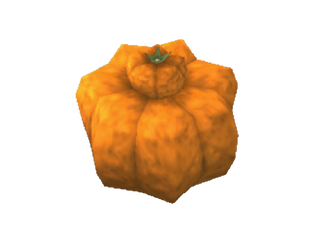 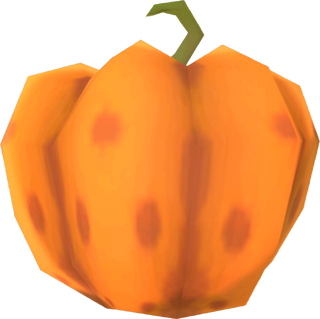 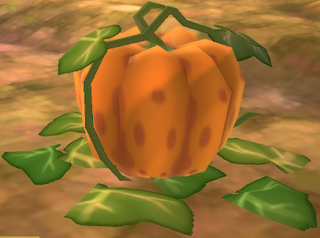 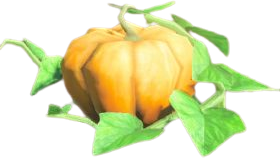 Jar, Rock, Skull, Barrel
Pumpkins are recurring Objects and Items in The Legend of Zelda series.[name reference needed] They occur sometimes as a visual element, sometimes as an item, sometimes as a breakable container, and sometimes as a combination of these. They appeared mainly as a recurring visual motif until Twilight Princess, where physical pumpkins and their products became considerably more important.

The first boss in Oracle of Ages is Pumpkin Head, who, as its name suggests, is a spirit with a pumpkin (specifically a Jack-o'-lantern) for a head. This continues the theme of pumpkins as a symbol of evil spirits seen in A Link to the Past.

Pumpkins feature prominently in Twilight Princess as one of the main exports of Ordon Village. In Ordon Village, Link can find pumpkins in the fields. These can be smashed to get pumpkin seeds, which are the primary ammunition for the Slingshot. The scarecrows near Link's House also appear to have pumpkins for heads. An Ordon Pumpkin is also found in a chest in Snowpeak Ruins, although Yeta misremembered the chest as containing the Bedroom Key. When added to the Simple Soup, the Ordon Pumpkin converts it to Good Soup, which restores four hearts as opposed to two.

Pumpkins seem to be the primary agricultural product of Skyloftians in Skyward Sword. One of the islands in The Sky, Pumpkin Landing, being dedicated to growing pumpkins, as it is the home to a sizable (by Zelda game standards) pumpkin patch and the Lumpy Pumpkin, a pub specializing in Pumpkin Soup. Even the decor of the establishment is pumpkin-themed, as are the names of the father and daughter who staff it. Pumpkins can also be found on the main island of Skyloft in smaller patches. There is also a minigame in Skyward Sword involving pumpkins, that being Pumpkin Pull. As in Twilight Princess, pumpkins can be smashed, although they yield a variety of items, as Jars do.

In Link's Crossbow Training, Ordon Pumpkins appear as destroyable objects that can be shot for extra points. They normally appear in clusters and mainly in stages that take place in Ordon Village.

In Hyrule Warriors Legends, Pumpkins appear as Plant-type Food. They are imbued with the Light Element. When consumed by a Companion Fairy in the Dining Room of the My Fairy mode, Pumpkins can increase the Fairy's Trust level and personality traits.