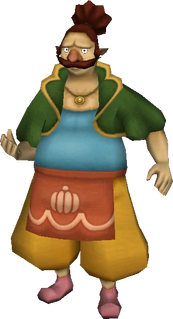 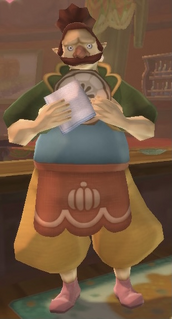 Pumm is a character in Skyward Sword.[2]

Pumm is the owner of the Lumpy Pumpkin pub. His Pumpkin Soup is renowned in Skyloft for its ability to restore health.[3] His daughter, Kina, serves as a waitress at the pub.[4]

If Link breaks the chandelier in the Lumpy Pumpkin, Pumm will make him do various tasks to pay off the damages, such as delivering Pumpkin Soup to Eagus,[5] helping Kina harvest Pumpkins,[6] and performing a duet with Kina after the young hero has obtained the Goddess's Harp.[7]

Later, Link must help Pumm deliver a basin of Pumpkin Soup to Levias to find the cause of his abnormal behavior.[8] Link must summon Scrapper to help carry the soup to Levias.

Both his and his daughter's names are a pun on "pumpkin".