Zelda Wiki
Register
Don't have an account?
Sign In
Advertisement
in: Animals, Horses, Characters, Characters in Oracle of Ages (Himekawa) 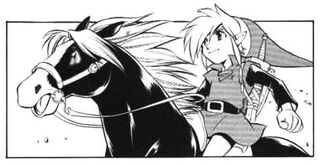 Oracle of Ages (Himekawa)
Puini is Sir Raven's horse in the Oracle of Ages manga by Akira Himekawa. Although a minor character, it is instrumental in the defeating the sorceress Veran. The horse accompanies Raven on all of his travels and resides with him in the Hidden Village.

Puini is first seen when Sir Raven returns from speaking with Queen Ambi and Nayru, the latter who is currently possessed by Veran. Both Puini and Raven sense Link following them.[1] Raven dismounts the steed and both disappear around a building. Link follows them and is confused to see Raven fishing.[2] Puini notices Link and nuzzles the hero while emitting a neigh, alerting Raven to his presence.[3] After a brief confrontation between the two, Raven allows Link to mount Puini with him. Puini brings the two knights to the Hidden Village, where Raven has brought individuals who are in danger of execution.[4] Raven tethers Puini as he leaves to check the fields,[5] leaving the horse with Link and Roperi. Puini is seen later on when Raven rides it to Queen Ambi's Black Tower, where a fight has started with the workers.[6] Once the rebellion has been quelled, Raven dismounts Puini and leads it back to the Hidden Village, unaware that Veran is following them. Veran then possesses Ralph and uses him to burn Raven's Mystery Seeds, which are her fatal weakness.[7] She sends Ramrock to destroy the village.[8] After Link defeats it, Queen Ambi's army arrives and captures Raven. Link spots Puini tied to a wooden pole and rides him with Ralph to Sir Raven's rescue. The three arrive in time to save Raven from execution, but Veran releases Nayru and possesses Queen Ambi instead. Nayru awakens and transports the group to modern day Labrynna, sending them back after a plan is formed. Nayru speeds the growth of Roperi's Mystery Tree sprout so it will grow the needed Mystery Seeds to defeat Veran. Despite this, Ralph still leaves to confront Veran on his own. When the Mystery Tree produces a Mystery Seed, Sir Raven orders Link to take Puini as his mount.[9] Puini and the knights rush to the Black Tower and use the Seed against Veran.

After Veran and Ganon are defeated, Link prepares to return to his own time, at which point Puini expresses his desire to accompany Link.[10] Raven acknowledges his steed's choice and presents Puini to Link as a parting gift.[11] Link rides Puini to his grandparents' farm, where his grandfather remarks that Puini is a fine steed.[12]