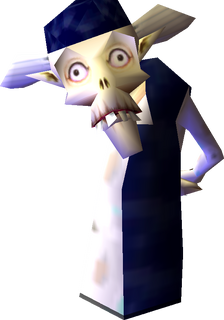 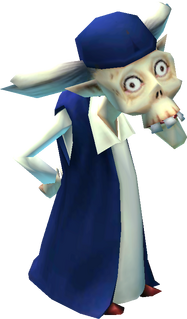 The Professor is a character in Majora's Mask.[1]

The Professor works at the Marine Research Lab as a marine scientist at the Great Bay.[2] He takes care of Lulu's Eggs by keeping them in a special tank until they hatch. The Professor says that if the Zora Eggs are not kept in the specially-made aquarium, they may die, due to the abnormal weather patterns causing a rise in the ocean's temperature.[3] He also raises Fish to deal with the shortage resulting from the rising temperature in the ocean, feeding them other Fish to do so, which does not sit well with some Zoras.[4]

In the Majora's Mask manga by Akira Himekawa, Dr. Mizuumi is sailing on a small boat when he finds Link on the ocean after the latter's battle against the Gerudo Pirates. He mistakes Link for the Zora Mikau, since Link is wearing the respective mask. Link gives him Lulu's egg for safe keeping and study.[5]