) is the crown Princess of Hyrule an incarnation of Princess Zelda in Hyrule Warriors and Hyrule Warriors Legends. As the Princess of Hyrule and member of the Royal Family of Hyrule, Princess Zelda is the supreme leader of the Hyrulean Forces that defend the Kingdom of Hyrule. Supported by her Sheikah bodyguard and faithful servant, General Impa, she leads the Hyrulean Forces to battle the forces of darkness that threatens her kingdom.

Like most of Zelda's incarnations, Princess Zelda is a benevolent and wise ruler dedicated to protecting the people of Hyrule from evil. In the Hyrule Warriors series, however, she plays a more active role in its defense, leading the Hyrulean Forces into battle against her kingdom's enemies. A charismatic leader, she capable of inspiring her troops to fight with her words alone and was able to recognize Link's potential as a hero. 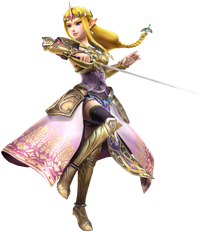 Zelda is a graceful warrior princess and gifted magic user. Like most of Zelda's incarnations, she possesses great wisdom, prophetic abilities, and is a skilled archer. She is also a talented swordswoman. In her default fighting style, she wields a Rapier that can transform into a Bow of Light that she can use to fire Light Arrows. With her magical abilities, she creates Magic Circles and performs spells such as Din's Fire, Farore's Wind, and Nayru's Love. Together with Impa, Princess Zelda is shown to be able to close the Gate of Souls in the Era of the Hero of Time. She is also a skilled musician and conductor. As Princess of Hyrule, she the bearer of the Triforce of Wisdom and possesses heirlooms of the Royal Family such as the Goddess's Harp, the Wind Waker baton, and Dominion Rods. She is also capable of transforming into her Sheikah alter-ego Sheik.

Each of Zelda's movesets has three levels for each weapon type. In Hyrule Warriors, she also has 8-bit versions of her Rapier and Baton (her Dominion Rod lacks an 8-bit weapon due to the moveset being DLC). In Hyrule Warriors Legends, her 8-bit weapons do not appear and instead each of her movesets gains a new Level 4 weapon, which are stronger versions of her Level 3 weapons.

) is a shadowy doppelgänger of Princess Zelda. Unlike Dark Link, Dark Zelda has no role in the main story and appears as an enemy in certain Adventure Mode and Challenge Mode scenarios. She uses the same moveset and drops the same Materials as Princess Zelda. 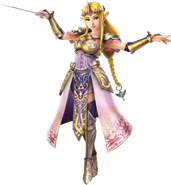 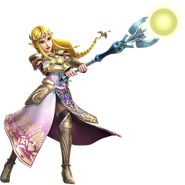 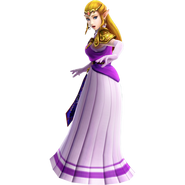 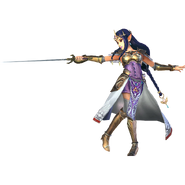 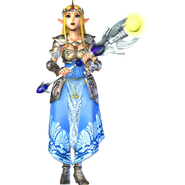 Zelda's A Link to the Past recolor 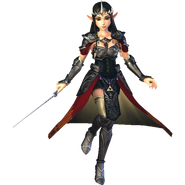 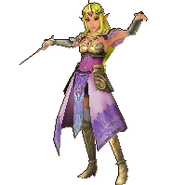 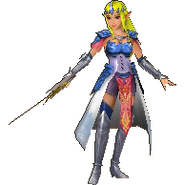 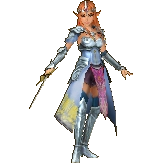 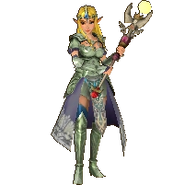 Zelda's Phantom recolor
Add a photo to this gallery

Retrieved from "https://zelda.fandom.com/wiki/Princess_Zelda_(Hyrule_Warriors)?oldid=539961"
Community content is available under CC-BY-SA unless otherwise noted.