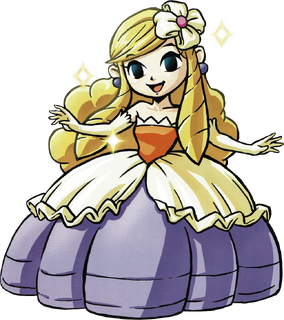 Princess Styla is the cursed daughter of King Tuft, sovereign of Hytopia in Tri Force Heroes.[4]

Prior to the events of the game, Princess Styla was a beautiful princess adored by all in the kingdom of Hytopia.[5] Although adored by many, Lady Maud, the Drablands witch, did not and despised her for her unbearably cute fashion sense.[6] The witch had sent her a beautifully wrapped gift, which Princess Styla could not resist opening.[7] Upon opening it, however, she was enveloped in purple smoke that cursed her to wear an irremovable, ugly jumpsuit.[8] Humiliated and miserable, the princess isolated herself by locking herself in her room and the rest of the kingdom wept for her fate.[3] In response to her curse, the people of Hytopia grew afraid of fashion, in fear that they would be cursed next. In agony, her father King Tuft issued a request for worthy heroes who could go into the Drablands, find the witch, and save his daughter.

Link meets Princess Styla and King Tuft when the King summons him to his throne room after he clears the Woodlands Area of the Drablands. She is far too upset to talk to him, however, and soon retreats to her room. Although isolating herself, Styla can occasionally be seen hiding around the town of Hytopia, secretly rooting for Link. She quickly runs away once he spots her. The townsfolk however believe her to be a black ghost, and hope to take a picture of her.[9][10]

After the Links defeat Lady Maud and finds the last of her Materials, Link quickly returns to Madame Couture to tailor the Lady's Ensemble, an Outfit that can lift the curse off of Princess Styla.[11] Link hurries back into the castle wearing the Outfit, and uses its magic power to remove Styla's curse. Returned to her former, beautiful self, Styla gives Link her gratitude, and King Tuft holds a big ceremony to celebrate. After the festivities, Link returns to King Tuft's throne room for his reward, only to be given Styla's Cursed Tights. Styla expresses that she misses the tights a little and how they had fit snug around her, but much prefers her old dresses. During the ceremony, the Photo Bro had filmed the entire event and had given it as a gift to Styla.[12] Link can speak with her whenever he wishes to rewatch the ceremony. With Princess Styla's curse lifted, she will no longer hide around the town of Hytopia.

Styla is most likely based on the word "style".