Princess Ruto,(OoT)[3] also stylized as Ruto,(HW)[6] is a recurring character in The Legend of Zelda series. She is the daughter and only child of King Zora, the ruler of the Sea Zora population residing in Hyrule, and serves as the attendant of the Zoras' patron deity Lord Jabu-Jabu, preparing his meals.[7] As a child, Ruto appears to be a tomboy and is shown to be very strong-willed and stubborn even in the face of danger, a trait she would temper and yet benefit from in her adult years when danger once again threatened her people.[8] Though she initially shows a selfish streak in her youth,[9] she grows to become much more benevolent in her adult years, especially after she is awakened to the knowledge that she is the Sage of Water that guards the Water Temple beneath Lake Hylia.

It is implied that Ruto's mother passed away some time before the events of Ocarina of Time, though she gave Ruto the Zora's Sapphire at some point in her youth. Ruto's mother told her that the stone serves as the so-called "Zora's Engagement Ring" by tradition, and instructed her to give it to the man that would one day become her husband.[10] 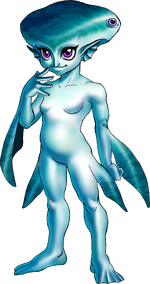 Ruto as she appears in her childhood

Princess Ruto is first mentioned when Link comes to Zora's Domain in search of the Spiritual Stone of Water in Ocarina of Time.[11] When Link arrives, Zora's Domain has been thrown into a state of disarray with the sudden disappearance of Princess Ruto, the Princess of the Zoras. After learning of Princess Ruto's disappearance and earning the Silver Scale from the Diving Game, Link makes use of the object to investigate Princess Ruto's disappearance, as her father does not seem to be able to give any attention to Link's quest while his daughter remains missing.[12] Taking the shortcut leading from Zora's Domain to Lake Hylia, Link discovers a bottle with a note inside it at the bottom of the lake. The note is signed with Princess Ruto's name and reveals that she has been swallowed by the Zoras' patron deity, Lord Jabu-Jabu, and requires rescue.[13] Showing the letter to King Zora, the Zora ruler commands Link to rescue his daughter and allows him access to see Lord Jabu-Jabu.[14] It is later revealed that Princess Ruto accidentally dropped the Spiritual Stone of Water inside Lord Jabu-Jabu and lost it.[15] Instead of getting help, Princess Ruto chose to go deeper within Lord Jabu-Jabu hoping to find the stone on her own.

Link finds Princess Ruto fairly quickly upon his entry into Lord Jabu-Jabu's belly.[16] The feisty Zora princess denies knowledge of the letter Link had found in Lake Hylia and initially tries to deny any need for assistance, telling Link she could care less about her father's worry and ordering him to leave her.[2] However, Link continues to pursue Princess Ruto, attempting to convince her to either come with him or accept his help in recovering what she had lost.[17] Princess Ruto eventually reconsiders her opposition to the idea and accepts Link's assistance, deciding to have him carry her around Lord Jabu-Jabu's interior while they search for the Spiritual Stone of Water together.[18] Eventually, the two find the stone resting upon a raised platform deep within Lord Jabu-Jabu's belly. Link tosses Princess Ruto up onto the platform, where she recovers the stone,[15] though this causes the platform to rise into the chamber above them with Princess Ruto still on it. The platform descends again carrying a Big Octo, which Link is forced to battle. After defeating the beast, Link jumps onto the platform and rises into the chamber above, but finds no trace of Princess Ruto.

Eventually, Link is forced to battle against Barinade and, once he defeats it, Princess Ruto is shown waiting for him. The visibly shaken Zora princess scolds Link for the time it took him to rescue her, but the two are soon transported outside via the portal.[19] Once outside Lord Jabu-Jabu's belly, Princess Ruto's demeanor toward Link changes entirely, with the Zora princess having grown quite fond of him and asking him what reward he would ask for rescuing her and helping her recover the Spiritual Stone.[20][21] Link requests the Spiritual Stone of Water, and Princess Ruto happily hands it over to him, calling it her most "precious possession" and revealing that the stone effectively acts as the "Zora's Engagement Ring",[11] meaning that she now considers the two of them engaged to be married. Despite this, Link is unaware of his engagement to Princess Ruto, only knowing that he had finally obtained the three Spiritual Stones.[22]

Seven years after Link is placed into suspended animation by the Master Sword, evil returns to Zora's Domain when Ganondorf uses the power granted to him by the Triforce of Power and causes the entire area and its inhabitants to be frozen under a thick layer of Ice. This fate also befalls Princess Ruto initially, but she is rescued from beneath the cursed ice by Sheik. She then goes to the Water Temple in the hope of finding a way to save her people from being eternally frozen.[23] This is where she and Link meet again for the first time in seven years. Although Princess Ruto is happy to see him, she is aware that this is not a time to talk about love. Princess Ruto asks Link to assist her in saving the Zoras by destroying the monster at the heart of the temple and informs him of the workings of the Water Temple.[24] After this, Princess Ruto leads Link into one of the temple's upper chambers but mysteriously vanishes. Link does not see her again until he defeats the Giant Aquatic Ameoba Morpha, the monster responsible for the sad state of both Zora's Domain and the nearly dry Lake Hylia. Inside the Temple of Light, Link learns that Princess Ruto is the new Sage of Water that guards the Water Temple. She tells Link that she still loves him, but their engagement must be put on indefinite hold due to her duty as a Sage, and he must continue his search for Princess Zelda.[25] Right before he returns to Kingdom of Hyrule, Princess Ruto gives him the Water Medallion,[26] and asks him to thank Sheik for saving her if he sees him again.[27]

Princess Ruto appears within the water room inside Ganon's Castle after Link dispels the Water Barrier protecting the castle, where she urges Link onward to rescue the captive seventh Sage and leader of the Sages, Princess Zelda. After Link defeats Ganondorf both in his Gerudo form and in the form of the Dark Beast Ganon, Princess Ruto combines her power with that of the other Sages to cast Ganondorf back into the tainted Sacred Realm and to create a powerful seal that would imprison him there. She is last seen alongside several of the other Sages atop Death Mountain, overlooking a jubilant Kingdom of Hyrule now freed of Ganondorf's evil tyranny.

While Ruto does not physically appear in The Wind Waker, one of the stained glass windows in Hyrule Castle's basement, where the Master Sword now rests, depicts her as the Sage of Water. The fact that the Rito evolved from the Zora combined with the fact that Laruto, another Zora sage with a very similar name, is Medli's ancestor, has led some to believe that Laruto is a relative or descendant of Ruto.

Treasures called Ruto Crowns appear in Phantom Hourglass, where they are said to have been worn by a Zora princess.[28]

Ruto Crowns reappear in Spirit Tracks, where they are said to have been worn by many princesses of the Zora royal family.[29]

In Breath of the Wild, the fifth Stone Monument, entitled the History of the Zora, Part Five, details the story of Ruto.[30] She lived in a time before the Great Calamity and the creation of Divine Beast Vah Ruta.[31] It is known that she was the attendant to the Zora's patron deity and was widely beloved.[32]

When an evil man threatened Zora's Domain, Ruto awoke as a Sage and fought against him with the princess and the hero of legend.[33] Her achievements are forever etched into the history of Hyrule Kingdom, passed on and remembered by the Zora.[34] Divine Beast Vah Ruta, which would later be piloted by another Zora princess, was named in honor of Ruto.[35]

Ruto largely fills the same role in the Ocarina of Time manga by Akira Himekawa as she did in the actual game, though there are some slight differences that can be seen in her character when comparing the two. In the story of the manga, Ruto is swallowed by Jabu-Jabu intentionally, as she hopes to escape an engagement to a suitor presented to her by her father whom she deems unacceptable. After Link saves her, she grows quite fond of him and grants him the Zora's Sapphire in rebellion against the marriage her father was attempting to arrange for her. As in the game, she comes to truly believe she and Link are destined for marriage following these events. In this take on the story, she seems to be far less tolerant of her father, ill concealing that she considers him annoying. She also makes a habit of saying 'Zora' at the end of her sentences.

In Hyrule Warriors}, Princess Ruto appears as a playable Warrior. She is based on her slightly redesigned adult form in Ocarina of Time 3D. She wields the Zora Scale, which she uses as a medium for water magic. Similarly to Lana, she can be considered a wizardly character, as her moveset often consists of area-of-effect attacks, such as forming whirlpools, a giant sphere of water which she uses to trap her enemies and unleashing wide splashes. She has a unique mechanic where executing her combos causes a blue gauge to fill. At any point, she can use the gauge to fire off long-range waves of water that plow through enemies.

In Legend Mode, Princess Ruto first appears in the Scenario "Land of Myth", where she has been taken hostage by Darunia and held in Death Mountain. The Hyrulean Forces, led by Impa and Sheik, come to her rescue and defeat Darunia. It is then discovered that Darunia was being manipulated by an outside force. Princess Ruto, along with Darunia, then accompany the Hyrulean Forces as they venture to locate and close the Gate of Souls in Lake Hylia in the Scenario "The Water Temple". Princess Ruto assists the Hyrulean Forces by opening the floodgates allowing passage to the Water Temple. She then shortly leaves to find the Lens of Truth, in order to reveal the true identity of the false Princess Zelda. She is however soon captured by Zelda. After being rescued, she hands the Lens of Truth to Sheik before retreating from the battle.

Ruto otherwise does not play a large role in Legend Mode by default. She, however, will appear in place of Zelda, Sheik, or Darunia should any one of them be chosen in a Scenario they appear in. In "The Sacred Sword", Ruto will be the one to activate the Fire and Water Statue if Darunia is being played as. In "Liberation of the Triforce", Ruto will be the one to grant Link the Light Arrows during the final battle if Zelda is picked.

When defeated in battle, Princess Ruto may occasionally drop her Earrings as a silver Material, and rarely her Scale as a gold Material.

Ruto's name may come from the Japanese word naruto, which means "spiral" or "whirlpool".[36]