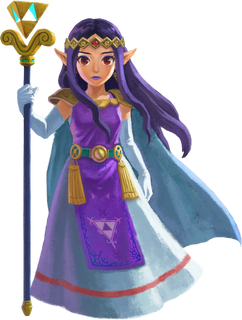 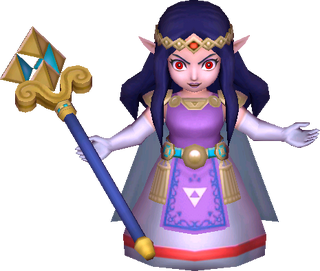 Hilda(SSBU)[name reference needed], traditionally Princess Hilda,[2] is the princess of Lorule and a principal character in A Link Between Worlds. She is the Lorule counterpart of Princess Zelda and assists Link on his quest.

Princess Hilda has a similar appearance to Princess Zelda in A Link Between Worlds, but is very distinct. Hilda has a dark purple color scheme that matches her long dark hair. The Triforce patterns are designed on her attire. Hilda also wears earrings positioned upside down to reflect the appearance of the late Lorulean Triforce. In opposition to the Hyrulean Triforce being gold, the Lorulean Triforce appears black. Hilda's staff is also tipped with an inverted Triforce, although in this case, the Triforce pattern is inscribed on a tetrahedron shape. Aside from the difference in color scheme, her clothing is near identical to Princess Zelda's attire. However, Hilda's dress is sleeveless and includes a pair of long white gloves. Hilda also has red eyes, in contrast to Zelda's blue eyes.

Princess Hilda appears to be Princess Zelda's Lorulean counterpart. While her land is in a critical state of destruction, Hilda wishes for her land to have a hero. She believes Link is a suitable candidate for the job.[3] While Link is on his quest to save all the seven sages and Princess Zelda, Hilda can communicate with Link telepathically. During Link's quest to gain the Triforce of Courage, Hilda acts as a guide while he traverses Lorule.

When Link chases after Yuga to Lorule, he finds himself in Lorule Castle, where Yuga surrounds himself with the Paintings of the Seven Sages, using their power to obtain the Triforce of Power and merge with Ganon. Hilda appears shortly thereafter to restrain him and allow Link to escape.[4] She takes him to another dimension, where she explains that he must retrieve the Seven Sages who are now scattered across Lorule and join forces with them to defeat Yuga Ganon.[5]

She leaves him in a road near the Lorulean Blacksmith's house. After Link awakens, Hilda speaks to Link telepathically to explain the dichotomy between Hyrule and Lorule, and that Yuga Ganon's actions have caused Fissures to appear, linking both worlds.[6] She also explains that because of the ruined state of Lorule, Link cannot access all parts of it from within her kingdom, so the young hero must enter Lorule from equivalent locations in Hyrule.[7] Afterwards, Hilda acts as a guide, telepathically communicating with the young hero whenever he enters new parts of Lorule. When Link enters Lorule from the Sanctuary, she tells him that the Lorulean location was once a holy place, but has now become the opposite, and that something nearby will help him on his journey.[8] When Link enters Lorule near Turtle Rock, she tells the young hero that there is a fiery maze nearby, and that he must find a way to control the flames to find the Sage within.[9]

Upon entering Lorule near the Dark Palace, Hilda tells Link that he has entered an evil place where former Lorulean soldiers have been corrupted and now worship a terrible beast,[10] a fact which she laments over.[11] When Link enters Lorule from Rosso's Ore Mine on Death Mountain, where she tells the young hero that the Lorulean Death Mountain is covered in a perpetual winter and that Rosso is trapped there.[12] Upon entering near Misery Mire, Hilda tells Link that she senses the presence of a Sage in the desert, but remarks that Lorule does not have deserts. She tells the young hero that he must begin his search in the nearby Swamp.[13]

Occasionally, after Link saves a sage, Hilda is seen talking to Zelda's portrait in Lorule castle, commenting on how she hopes that their Hyrulean hero will succeed.[14]

After Link rescues all seven of the sages and reaches the throne room in Lorule Castle, Hilda informs Link that Lorule once had its own Triforce. The people of Lorule fought brutal wars over the Triforce, and in order to put a stop to the chaos Hilda's ancestors destroyed their Triforce completely. Although this was done with good intentions, the consequences were catastrophic; Lorule was not able to exist without the Triforce's power, and began to tear itself apart. Hilda couldn't bear to see her beloved kingdom rent to pieces, slowly dying, so when she discovered of the existence of another Triforce (Hyrule's Triforce), she schemed to obtain it so she could restore Lorule and protect her people from destruction; Link was nothing more than a pawn Hilda used to assist her in that goal. With that, she swiftly steals Zelda's Triforce of Wisdom and summons Yuga Ganon to take Link's Triforce of Courage by force, starting the final battle.

Yuga Ganon uses every ounce of his newly acquired powers in the ensuing battle, but is not able to defeat Link, collapsing to the ground after a fierce struggle. Hilda reappears, demanding that Yuga give her the Triforce of Power to prevent Lorule from being undone; Yuga, however, reveals that he had never cared about what became of his homeland, and turns Hilda into a painting before absorbing her, granting him the Triforce of Wisdom before he fights Link for the last time. In spite of his now even greater powers, Yuga still fails to slay Link, and instead is felled himself, releasing both the Triforce pieces and a severely weakened Princess Hilda.

After the battle is over and Zelda is revived, Hilda, now at the end of her rope, prepares to attack Link in a last-ditch effort to save her kingdom; before she can, however, Ravio intervenes and reveals himself to be Link's cowardly Lorulean counterpart. He tells his princess that he knew that her plan to steal the Hyrulean Triforce was a bad idea, but he was too scared to confront them on his own; thus, he journeyed to Hyrule in search of a hero who could stop them. At first Hilda is furious at having a second servant of hers betray her, but soon realizes that she is perpetuating the chaos that caused her Triforce's destruction in the first place; horrified at this discovery, she apologizes to Link and Zelda and agrees to send them home. Along with Ravio, the princess takes the Hylians to what was once Lorule's Sacred Realm and use the last of Ravio's Bracelet's power to send them through a crack to Hyrule.

Link and the Princess re-enter their world in the Sacred Realm with their Triforce straight ahead. Zelda and Link look at each other, knowing they each have the same wish, and touch the Triforce together.

In Lorule, Hilda and Ravio have not moved. Suddenly an earthquake rocks them to the ground, startling them both. They watch in amazement as the Lorulean Triforce is remade above them, whole and intact once more. An overjoyed Ravio smiles hugely as Princess Hilda happily cries. Lorule's darkness is infused with light, and Hilda thanks Zelda and Link for gifting Lorule its rightful Triforce.

In Super Smash Bros. Ultimate, Hilda appears as a Spirit with no ability.

Hilda is suggestedly from the Japanese 昼だ (hiru da), opposite of the former candidate "ヨルダ"(夜だ (yoru da)), as it was too straightforward.[15]

Hilda is from the German name root Hild, meaning "battle". [16]