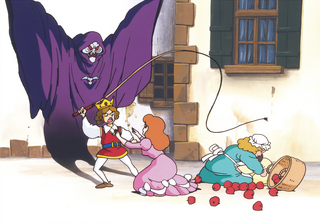 Artwork of the Prince of Hyrule

The Adventure of Link (Ran)

King of Hyrule (father)[2]
Princess Zelda (sibling)[2]
The Prince of Hyrule is a character in The Adventure of Link.[2] He is partly responsible for putting Princess Zelda in a coma.

His father was the King who had ruled Hyrule and maintained peace with the Triforce. After his father died, the prince became king and inherited everything he owned. However, he only inherited the Triforce partially. While he was looking for the other Triforce pieces, the Magician who was close to his father brought him some unexpected news. Apparently, the King told Princess Zelda, the prince's younger sister, about the Triforce.

The prince immediately began questioning her, but the princess refused to tell him. The Magician then angrily threatened to place her in an eternal sleep if she didn't tell him. After she refused the Magician, he cast a spell on her, and the surprised prince tried to stop him. However, the Magician fought him off and completed the spell, dying immediately.

In his grief, the prince placed the princess in a room only members of the Sheikah tribe could open, hoping that she would eventually come back to life. The prince ordered that all females born into the Royal Family of Hyrule must bear the name "Zelda" so that the tragedy would not be forgotten.

The Adventure of Link (Ran)

In Maru Ran's Manga adaptation of the game, the Prince initially appears in the same backstory as in the manual, making a deal with the Magician and making the royal decree to name all princesses born into the Royal Family "Zelda". Unlike in the manual, the Magician escapes from the Prince after being wounded by his sword. After the death of the werewolf swordsman, Ganpu, Link has a nightmare of Hyrule under the oppression of the Magician. Just as the Magician is about to bring harm to Zelda, Link strikes his mask and unveils the Prince. Immediately afterwards, Link wakes up.

The Prince appears one last time in the final volume, revealed to be the true identity of the Magician. The Prince reveals that he has been attempting to get the Triforce for countless centuries, rapidly decaying before Ganon bursts through his body and snatches the Triforce. With his dying breath, the Prince reveals that Ganon is his alter-ego, and that his revival was necessary for him to continue living. He soon realizes that his own ambitions were his undoing and passes away, after apologizing to his sister.