Zelda Wiki
Register
Don't have an account?
Sign In
Advertisement
in: Princes, Swordsmen, Characters, Characters in The Legend of Zelda TV Series 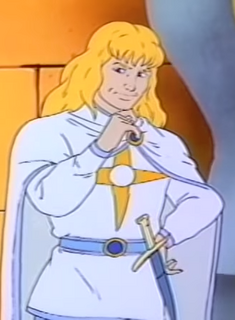 The Legend of Zelda TV series
Prince Facade is a character in The Legend of Zelda TV series. He is a knight from the land of Arcadia and appears only in the episode "The White Knight", which is named after him.[1] Although the prince is brave and strong, he is known to be vain and will not fight if it means it will ruin his image or mess up his clothes.[2] His weapon of choice seems to be a Crossbow.

Prince Facade first appears when Link is struggling to defeat an Octorok. Easily and elegantly, Prince Facade defeats the monster with his crossbow, quickly impressing Princess Zelda and sweeping her off her feet. Zelda, fascinated by the prince, immediately forgets all about Link while the young hero, who does not like being outdone by the handsome stranger, becomes jealous.[3] Prince Facade offers Zelda a ride back to the castle as they leave Link to walk back there.[4] When they arrive back at the castle, King Harkinian and Zelda are fascinated by Facade and his tales of heroism, with the princess not caring about Link anymore and not considering him to be in the prince's class. Prince Facade even told Zelda that he has battled Ganon himself (something that Ganon himself later confirms to his minions).[5] Link, feeling left out,[6] decides to try and match Facade, and attempts to dress more like him.[7] However, when he makes his appearance in front of Zelda and the king, he embarrasses himself and causes everyone to laugh at him, promptly causing Link to storm out of the castle humiliated and angry.[8]

Meanwhile, Facade continues to impress Zelda with his stories of saving a city from monsters.[9] As they are about kiss, Tektites arrive and attack Facade while Moblins throw Zelda out the window, where a Zola readily catches her. The Zola carries Zelda out of the castle, with Facade in pursuit, but when the Zola jumps into the water, Facade hesitates on the bank, not wanting to get his clothes wet and muddy.[10] Zelda screams at him to save her, but he refuses, saying that heroes do not get dirty.[11] Link, who was still near enough to hear Zelda's screams, rushes back to get past the prince and defeat the Zola with three Sword Beams, thus rescuing Zelda.[12] Prince Facade quickly tries to calm the angry Zelda by making up excuses,[13] but she refuses to listen and makes him fall in the mud.