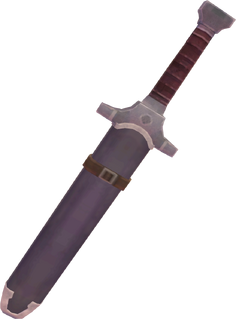 Ordon Sword
Wooden Sword
The Practice Sword is an item in Skyward Sword.[1][2][3] It is used by knights in training at the Knight Academy.[4]

After Link discovers that Groose, Cawlin and Strich kidnapped his Crimson Loftwing and stowed him away on the far side of the Waterfall Cave,[5][6] Link must make his way into the Waterfall Cave to rescue him. As the Waterfall Cave's entrance is plagued by monsters, Pipit suggests that Link borrows a Sword from the Knight Academy's Sparring Hall before making his way inside.[7]

Inside the Sparring Hall, Eagus gladly allows Link to train with the Practice Sword.[8]

Link will then attempt to leave with the Practice Sword only to be scolded by Eagus because taking Swords outside of the Sparring Hall is not permitted.[9] However, upon hearing that his Loftwing is missing, Eagus makes an exception and allows Link to use the Sword on the condition that he completes some training exercises in the Sparring Hall.[10] To find his Loftwing, Link needs the Practice Sword so that he can cut the wooden spikes guarding the Waterfall Cave and go through it. After his Loftwing is rescued, Link keeps the Sword until he is introduced to Fi within the Statue of the Goddess and receives the Goddess Sword.