This article is about the basic Power Bracelet. For its upgraded version, see Powerful Bracelet. 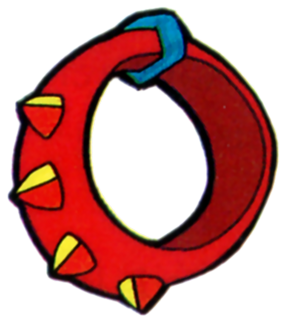 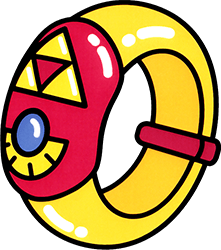 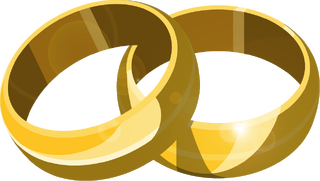 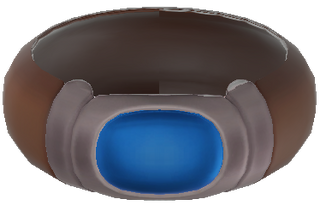 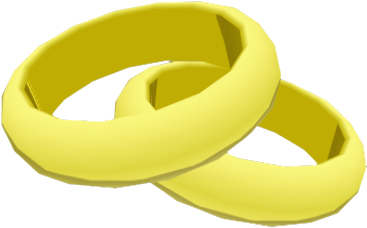 Power Glove
Goron's Bracelet
Gauntlets
The Power Bracelet is a recurring Item in The Legend of Zelda series.[1][2] It bolsters Link's kinetic power to that of a superhuman.[3] Depending on the iteration, Power Bracelets may either come singularly or in pairs, though there is no discernible difference on their efficacy.

In The Legend of Zelda, the Power Bracelet is obtained by activating an Armos in the northwestern region of Hyrule, either destroying it or tricking it to move from on top of it. Through the Power Bracelet, it is possible to push rocks on the overworld aside, revealing secrets. The Power Bracelet's location and method of obtention are the same in the Second Quest.

The Power Bracelets from The Wind Waker

In The Wind Waker, the Power Bracelets are housed within Fire Mountain, which can only be entered after Link obtains the Ice Arrows following his second venture into the Forsaken Fortress. To access them, Link must ascend the Mountain and enter its vent, leading to a chamber containing Fire Keese and Magtails. The Magtails must be defeated within a set time limit (initiated after freezing the lava spout from outside), and will cause a Treasure Chest that contains the Power Bracelets to appear. With the Power Bracelets, Link can lift the Stone Watcher that obstructs the exit.

The Power Bracelets are necessary to lift other Stone Watchers, such as above the Savage Labyrinth on Outset Island as well as the entrance to the Earth Temple on Headstone Island, and lift bombable rocks, making bombs redundant to destroy them placed on the ground. Link may also return to Outset Island to carry the single Pig owned by Rose across the island in order to coax it into digging a hard patch of soil and uncover a Piece of Heart.

The Power Bracelet in Four Swords Adventures is the only iteration of the item that can be used, lost and regained between levels. One Power Bracelet appears in a chest inside Dampé's house in The Swamp's cemetery. It functions similarly to the Blue Bracelet in that its power becomes a passive skill, rather than consuming space as a versatile item. With its power, one of the Links can lift objects, such as Trees.

Another Power Bracelet appears in the Lost Woods, given to one of the Links by Dekki in return for helping him.[5] The Power Bracelet in Kakariko Village is located in the southern part of the village, accessible behind a locked block in a house occupied by the Old Man. The only means to access the chest containing it is to show a Cucco to the elderly man, who is mourning his late wife's death.[6] Upon giving the Cucco to him, he grants the Links a Key that leads to a back room in his house containing two Chests,[7] one containing 150 Force Gems and the Power Bracelet. Frozen Hyrule also contains a Power Bracelet.

The Power Bracelets are vital to moving bookcases within Dr. Left's house in order to reach Librari and obtain the Flippers in The Minish Cap. A Minish in his house indicates the general location of the Power Bracelets,[8] guiding Link to the Fountain, which is only accessible while the hero is Minish-sized. The Power Bracelets ostensibly can only be worn while in Minish form as well, as there are no discernible effects on Link's strength while he is regularly sized. In addition to bookcases, Link is able to push normal-sized boxes around.

In The Legend of Zelda TV series, the Magic Bracelets function and look much like in the original The Legend of Zelda. The bracelets appear in the episode "That Sinking Feeling" and give its wearer one minute of super strength.[9] Link obtains the Magic Bracelets after he defeats a Darknut,[10] and he uses them later on in the episode to break free from the chains that Ganon tied around him. After breaking free, Link lifts Ganon and throws him far away, eventually defeating him.

In Hyrule Warriors and Hyrule Warriors Legends, the 8-Bit Power Bracelet from The Legend of Zelda appears as a Weapon used by Link. It is the Lv.★ form of the Gauntlet, and is statistically-identical to the Lv.3 Power Gloves. The Weapon appears as a pair of dark 8-bit gloves wearing a Power Bracelet on each wrist. The Ball and Chain used as part of the Gauntlet Weapon is instead replaced with the Raft, also from The Legend of Zelda.

The Power Bracelet also appears as an Item Card in the Adventure and Master Quest Maps of Adventure Mode, resembling its appearance in The Legend of Zelda. It also appears in the Koholint Island Map as a gray recolor. It allows Warriors to move boulders and tombstones or destroy Armos statues to find hidden rewards. In Hyrule Warriors Legends, the Power Bracelets from The Wind Waker also appear as an Item Card in the Great Sea and Master Wind Waker Maps, also allowing Warriors to move boulders to reveal hidden rewards.