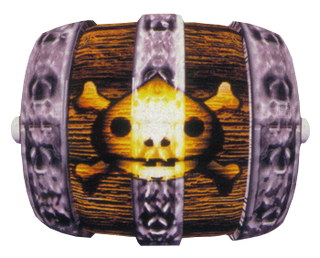 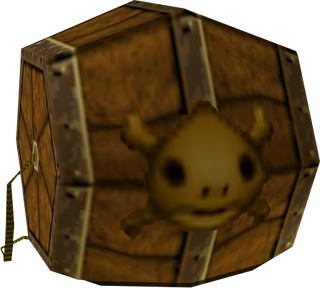 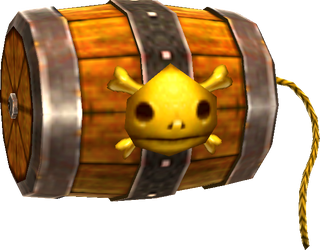 Barrel
Bomb
Powder Kegs are items in Majora's Mask.[1] It is the most famous product of the Gorons and much stronger than a regular Bomb.[2]

Link can only purchase and use Powder Kegs as Goron Link, and must first pass a certification test before he can purchase any.[3] To become certified, Goron Link must visit a Goron in the Goron Powder Keg Shop, which is frozen over in the winter so Link must use a Fire Arrow or wait until spring to enter. He will give the hero a lit Powder Keg, which he then must use to destroy the boulder blocking the entrance to the Goron Racetrack, before the Keg explodes.[4] If Link successfully completes this task, the Goron will give him a free Powder Keg, certifying him to buy and carry one Powder Keg at a time.[5]

Powder Kegs possess devastating explosive power, and as such can be used to destroy obstacles that regular Bombs cannot. A Powder Keg can be used to open the way to the Goron Racetrack; destroy the boulder on Milk Road on the First or Second Day, clearing a way to Romani Ranch; or to blow a hole in the roof of the Ikana Castle, granting access to the throne room. A Powder Keg can also be used to complete the pot-breaking game at Zora Cape by destroying all the pots at once.[10]

Once lit, a Powder Keg will explode when its fuse burns out. However, Link can make it explode immediately by shooting an Arrow at it.[11] Alternatively, an immediate explosion, like a well-timed Bomb or the Blast Mask, will suffice.