"The lid of a large soup pot. It smells vaguely of chicken broth... Yum! It can take quite a beating before breaking."
— Hyrule Compendium

The Pot Lid is an item from The Legend of Zelda: Breath of the Wild. It is an wooden pot lid apparently used to cover Cooking Pots but Link, Hylian travelers, and certain monsters use it as an improvised shield. However its durability is low and its wooden construction makes it vulnerable to burning when exposed to fire or the extreme temperature areas of Death Mountain, but like all wooden shields does not attract lightning during thunderstorms. The Pot Lid can be seen as the shield-based counterpart to the Soup Ladle as they are both implements used in cooking.

It is among the first shields that Link may come across. One spawns in the small enemy campfire with a cooking pot near the Temple of Time, though the Bokoblins may pick it up and wield it if alerted to Link's presence. One spawns near the Cooking Pot outside the Woodcutter's House. Another one spawns next to the Cooking Pot Koko uses in Kakariko Village. If Koko is nearby when Link picks it up she assumes it belongs to him and is happy to know who its owner is as she had been wondering who left it their failing to realize it belongs to High Spirits Produce which apparently owns the Cooking Pot. Link can also find one behind the outdoor kitchen with two cooking pots located next to The Great Ton Pu Inn in Hateno Village. Another can be found inside the Great Ton Pu Inn's kitchen. One spawns on a shelf near the Cooking Pot in Rito Village.

Due to its use in Cooking, Pot Lids are often wielded by chefs such as the traveling chef Stamm and the failed chef Moza which they use both in cooking and/or to protect themselves. Ironically it can't actually be used as a lid and is never depicted being used for that purpose, thus its use as a lid is only heavily implied much like its counterpart the Soup Ladle.

"The lid of a large soup pot. It smells vaguely of poultry broth... Yum! It can take quite a beating before breaking."
— Updated Hyrule Compendium description

Interestingly in early versions its description states it smells like "chicken" broth implying Cuccos are cooked in Cooking Pots, however after an update it reads "poultry" broth presumably due to the fact Cucco save for their Bird Eggs cannot be hunted or cooked yet poultry (bird meat) from wild birds in the form of Raw Bird Drumstick, Raw Bird Thigh, and Raw Whole Bird can.

As part of The Champion's Ballad DLC, Daruk's Training Journal tells a story from Link's past involving a Pot Lid. Shortly after becoming Daruk's sworn brother, Link and Daruk were present at Hyrule Castle during a test of one of the Guardians. Suddenly the machine went out of control firing deadly beams. However Link bravely grabbed a nearby Pot Lid and used a Perfect Guard to deflect one of the beams back at it which hit the Guardian's weak point destroying it saving everyone present. Impressed by the young knight's courage, quick thinking, and ingenuity King Rhoam Bosphoramus Hyrule promoted Link to Captain of Princess Zelda's Royal Guard detail and made him Zelda's personal bodyguard as she often assisted in the study of ancient technology. This story shows Link has a history of using Pot Lids as shields before the Great Calamity and that they've been used in Hyrule since before the Great Calamity. 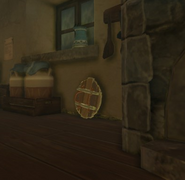 Retrieved from "https://zelda.fandom.com/wiki/Pot_Lid?oldid=534872"
Community content is available under CC-BY-SA unless otherwise noted.