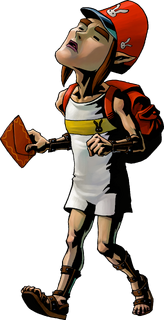 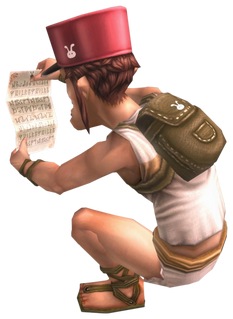 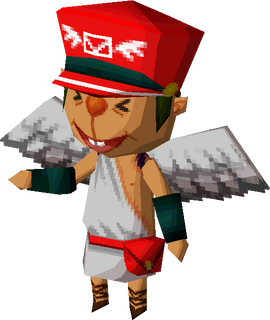 The Postman is a recurring character in The Legend of Zelda series.[3][name reference needed] He is responsible for Mail Delivery and usually works out of a Post Office.

In Majora's Mask, the Postman can be seen walking around Clock Town checking Mailboxes for mail. He takes his job very seriously, as he will not stop to chat when there is mail to be delivered,[4] and is not willing to leave Termina unless he is given explicit permission.[5] He spends his free time counting and trying to stop exactly on ten seconds.[6][note 1] If Link manages to do it, the Postman will reward him with a Piece of Heart.[7]

The Postman also has a role in the quest to reunite Anju and Kafei. He gives Anju a letter from Kafei the First Day, but refuses to tell her exactly where it is from when she asks.[14] On the Second Day, he delivers the letter to Kafei.

On the Final Day, Link receives the Priority Mail from the Curiosity Shop Man, where he has two choices for how to use it. One of the choices allows him to free the Postman of his schedule. If Link goes to the Post Office, he finds him kneeling on the floor, wishing to flee but unable to as he still has jobs for the next day.[5] If Link gives him the Priority Mail, he realizes that the mail is the highest priority and delivers it to Madame Aroma.[15] After receiving the mail, she orders him to abandon his schedule and flee.[16] Finally free, the Postman will meet Link outside the Milk Bar and give him the Postman's Hat before leaving town.

In Oracle of Ages, the Postman lives Lynna Village in the past and participates in the Trading Quest. He gives Link the Stationery in exchange for the Poe Clock.

The Rito are the postmen of the Great Sea. Quill and Ilari in particular bear the title of "Postman".[17][18] The mail sorter Koboli resembles the Postman of past games and his figurine implies he is the Postman's descendant.

The Postman runs around Hyrule Town in The Minish Cap delivering letters.[2]

After Vaati impersonates King Daltus, the Postman will Fuse Kinstone Pieces with Link;[19] a successful Fusion will result in Marcy appearing at the Post Office and begin selling the Swordsman Newsletter.[20]

In Twilight Princess, the Postman delivers letters to Link directly, provided he is in Hyrule Field, without the aid of Postboxes. He is much more comically depicted in this game than in earlier games. He breathes very oddly when running and hums several bars of a victory song after he finishes delivering a letter. However, like all Postmen, he still takes his job very seriously. The Postman is able to recognize Link while he is in wolf form.

When not delivering mail, the Postman can be seen in various places around Hyrule. He can be found in Ordon Ranch feeding an illegible letter to the Goats,[28] and in Zora's Domain behind the throne trying to identify who "Mr. Zora" is.[29] He is also seen in Telma's Bar deciding what to order,[30] and in the Elde Inn drying off a letter he dropped in the Hot Spring.[31] Finally, he is also found crouched on a wooden bridge in the Fruit Pop Flight Challenge, and in the forty-nine floor of the Cave of Ordeals after it has been cleared at least once.[32]

His red banner bares the symbol of a Rabbit along with the word Postman written in Fourth Hylian.

In Phantom Hourglass, the Postman now has wings in order to fly from one island to another, similar to the Rito from The Wind Waker. He no longer resembles the Postman of Majora's Mask. Whenever Link finds a wiggling Mailbox, the Postman will appear to deliver his mail. This time around, Link does not receive the letter itself, as it is instead read by the Postman. An exception to this is Jolene's Letter. He also now features a winged letter as his cap's insignia instead of the bunny from previous games.

In Spirit Tracks, the Postman looks very similar to his Phantom Hourglass counterpart, but has a different outfit and lacks wings. When meeting with or departing from Link, the Postman does an impression of a train, referencing the game's train theme. Unlike Phantom Hourglass, where he reads letters once and then takes off, he now gives Link his letters to read himself, as in Twilight Princess. He says that while letters used to be read out loud, the system was changed because some people thought it was rude, referencing how the Postman read the letters in Phantom Hourglass instead of Link.[33]

The Postmen from Majora's Mask and Twilight Princess appear as Stickers in Super Smash Bros. Brawl.

In Super Smash Bros. Ultimate, Postman appears as a Spirit with the ability, Bunny Hood Equipped, which starts a Fighter with a Bunny Hood.