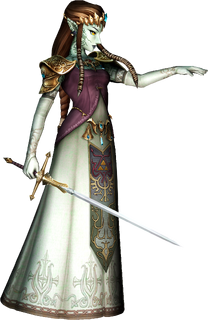 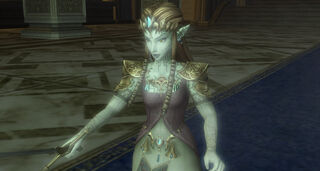 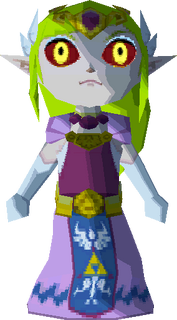 Possessed Zelda is a recurring Boss in The Legend of Zelda series.[1]

Ganon's Puppet Zelda is one of the final bosses from Twilight Princess. Ganondorf possesses Princess Zelda to fight Link when the two meet at Hyrule Castle.

She has three core attacks:

After hitting her three times, Puppet Zelda will be defeated, and Midna returns Princess Zelda to normal with the help of the Fused Shadows.

Princess Zelda's body is involved in the second-to-last boss fight of the game as the Possessed Zelda, where the princess's body is inhabited by the essence of Malladus, the Demon King. This fight takes place on the roof of the Demon Train within the Dark Realm as Link and Zelda seek to reclaim her body and stop the plots of Chancellor Cole and Malladus.

In this fight, Cole floats around the roof of the train attempting to take control of Zelda's Phantom body by sending demonic rats to attack her while Malladus awaits at the head of the train, sending lasers streaming toward the pair. To best the evil duo, Zelda, possessing a Phantom, must lead the way as only her armored body is strong enough to repel Malladus's laser attacks. Link must keep Zelda moving toward the head of the train to where her possessed body awaits, all the while protecting her from the demonic rats Cole unleashes as he attempts to prevent Zelda from reaching her body.

In the event of Zelda coming into contact with one of the rats, Link must use the boomerang to cut the evil puppet-strings Cole uses to control her like a puppeteer by sending it flying behind Zelda to cut the strings. Once Zelda comes into contact with her body, she will seize Malladus and the two will float off around the head of the train. Link must then strike Malladus truly with an arrow from the Bow of Light to purge Zelda's true body of Malladus's essence, ending the fight.