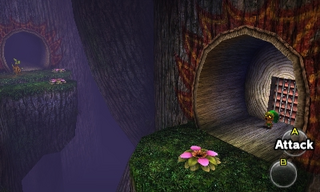 The Portal from Majora's Mask 3D

Lost Woods
Clock Tower
The Portal is a location in Majora's Mask.[1]

The Portal is the pathway that connects the Lost Woods with Termina. It features three rooms, the last of which includes a Treasure Chest containing Deku Nuts. Link accidentally wanders into the Portal after pursuing Skull Kid accompanied by two Fairies, hoping to retrieve his Ocarina of Time and Epona from them. He enters a large tree and falls into a deep chasm, landing on a Deku Flower in a large room with the Skull Kid hovering in the distance. It is revealed then that he had gotten rid of Epona,[2] and he then proceeds to lay a curse on Link, turning him into a Deku Scrub. Skull Kid subsequently departs with Tael; however, they accidentally leave behind Tatl, who apologizes to Link and offers her assistance to help him find a solution to his dilemma. Link and Tatl make their way through a few rooms that serve as a way to get Link acquainted to his new-found flying abilities as a Deku Scrub.

There is a lonely, withered tree near the exit in the final area of the Portal. Tatl brings attention to it, drawing a comparison between its appearance and that of Deku Link.[3] This tree is actually the deceased son of the Deku Butler,[4] and he is seen grieving over it after the defeat of Majora's Mask.

While Link is falling down the chasm, 10 different types of colored images are seen floating past. The images seen are different between Majora's Mask and Majora's Mask 3D. Some images were simply updated in the remake to better match a particular object while others were replaced entirely.