Zelda Wiki
Register
Don't have an account?
Sign In
Advertisement
in: Enemies, Common Enemies and Traps, Tentacular Enemies,
and 4 more 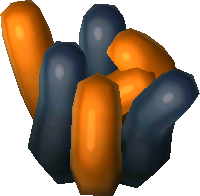 Dungeons
Popo are recurring Enemies in The Legend of Zelda series.[2]

In A Link to the Past, Popo are sentient masses of tentacles that move along the ground and will harm Link if he touches them. Their movement is shambling and without specific direction. Popo will not actively seek Link out and will often move in a different direction entirely. They appear in large swarms on occasion. Popo can easily be defeated with a single hit of most weapons, and often leave behind Rupees.

In A Link Between Worlds, Popo appear similarily to their appearance in A Link to the Past, except Popo will home in on Link and follow him when he gets near. Whenever Link touches one, he takes damage. Red Popo, appearing only in Turtle Rock, have more health and deal more damage.