It has been suggested that the portion of this page concerning Oracle of Seasons should be made into its own page. Should the target page already exist, this content should be merged into it where appropriate. Discuss this on article's talk page. 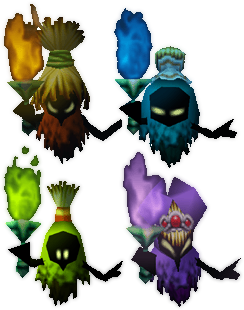 From left to right: Joelle, Beth, Amy and Meg from Ocarina of Time and Majora's Mask

The Poe Sisters are recurring characters in The Legend of Zelda series.[1][2] They are four Poe siblings that haunt and torment their respective residences, due to the unrelenting restlessness of their souls.

In Ocarina of Time, the Poe Sisters were four ghostly siblings named Joelle,[3] Beth,[4] Amy,[5] and Meg.[6] They haunted the Forest Temple for many years until Link was able to put their souls to rest. When defeated, each yielded a different colored flame that illuminated a torch at the center of the temple.[7] When all four torches were lit, Link was granted access to the temple's basement, where the boss, Phantom Ganon, awaited Link's arrival.

In Majora's Mask, they haunt the Spirit House of Ikana. They serve as four optional mini-bosses, and can be fought by paying the Poe Collector thirty Rupees. Link only has three minutes to defeat them, and his life cannot drop below three Hearts or else the Poe Collector stops the match.[8] The reward for defeating them is a Piece of Heart.[9]

Two Poe Sisters named Amy and Margaret serve as the mini-bosses of the Explorer's Crypt in Oracle of Seasons.[10] Margaret carries a lantern, leaving a trail of fire as she flies around, while Amy carries a sword that she charges at Link with. Each of them are first seen in rooms that gradually darken, eventually casting Link back to the dungeon entrance if he is too slow to flee the room. They then appear in rooms next to the room they had cursed, where Link fights one of them. Finally, they fight together, forcing Link to not only attack them, but also relight the lamps they extinguish, lest he be expelled back to the dungeon entrance.