Zelda Wiki
Register
Don't have an account?
Sign In
Advertisement
in: Enemies, Common Enemies and Traps, Bottle Items,
and 17 more 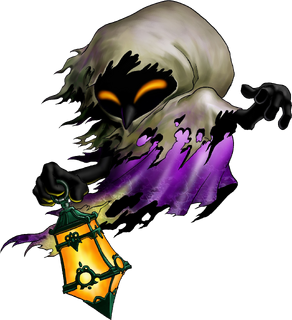 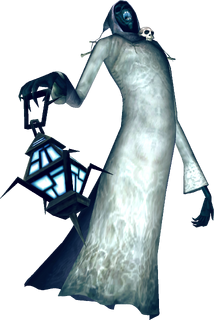 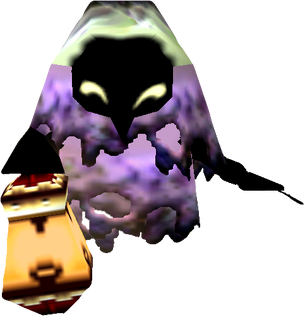 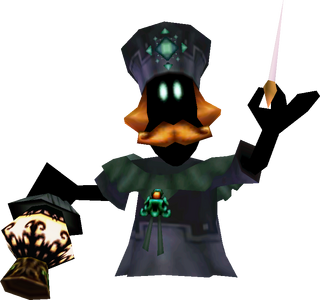 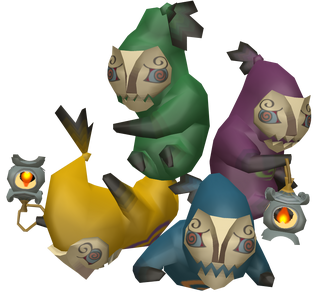 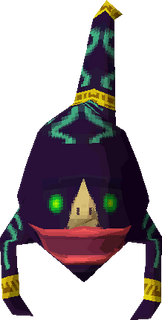 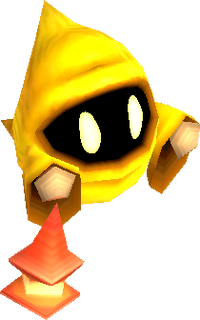 Poes are recurring Enemies in The Legend of Zelda series.[2] They are cloaked spirits that freely roam Graveyards and other haunted locales about Hyrule and other lands. They carry a Lantern with them that serves as the container for that specific Poe Soul. Poes are spirits of the dead that became monsters because of an unresolved attachment to the mortal world.[3]

As ghosts, Poes can disappear and reappear as part of their strategy, and can easily move through walls. Most Poes are known for being wicked, vengeful spirits, however some Poes are helpful and serve as guides, although not without their deceitful trickery. Poes can be defeated with merely the Sword in most games, however, they often have high health or defense mechanisms in place to hinder Link. The Bow can also be an effective weapon, and in some cases is the only weapon that can defeat them. When a Poe is defeated, its physical body disappears and its lantern is dropped and breaks, sometimes releasing its Poe Soul, which may be collected in certain games. These Souls are often important as sidequest items, or can be sold for Rupees.

The Poe bears many similarities to Ghinis, and may serve as a replacement to them in console Zelda games since A Link to the Past, as Poes behave similarly to them in that title. Poes have since developed separately from the Ghini, and now often employ different strategies and behavior. Poes are not common in the early 2D games, and Ghinis otherwise take their place in those games.

Other variations of Poes have also appeared. The Big Poe is a much larger, and in some cases, stronger variant of the Poe. Prankster Poes of Tri Force Heroes bear a close resemblance to Link. The Composer Brothers and Poe Sisters are notable Poes that appear in several games, the latter as mini-bosses. Jalhalla and the Big Poe of Four Swords Adventures are a pair of Poe bosses.

In A Link to the Past, Poes appear at the Graveyard near the Sanctuary in the Light World, flying sporadically around the area and circling tombstones. They always tend to appear in large groups. Their behavior is similar to that of Ghinis. Much like the Ghini, they also have high health and endurance, and tend to take many hits before they are slain. Poes usually drop items, such as Magic Jars or Arrows when defeated.

Their Dark World equivalent is the Hyu, which acts and appears in similar areas to the Poe.

In Ocarina of Time, Poes take on the appearance of hooded wraiths with glowing eyes, and faces shrouded underneath their oversized cloaks. Their distinctive lanterns immediately identifies them, and is the only part of them that will not turn invisible. Targeting a Poe will cause it to temporarily become invisible, although they will reappear in even, predictable intervals. They attack by swinging their lanterns madly at Link. These Poes appear predominately in the Kakariko Graveyard, and rise from their disturbed tombstones, much like Ghinis of earlier games. A second kind of Poe with a square-shaped head also appears around Hyrule Field when Link is an adult, and appears in the same spawn spots as Big Poes, except that they will only appear when Link is not riding Epona. These Poes do not disappear when Z-Targeted, and instead circle around Link and drop flames around him. All Poes will leave Poe Souls when defeated, which can be collected inside Bottles.[4] These Souls can then be sold to the Poe Collector when Link is an adult for a sum of Rupees. The Poe Soul is a purple-flamed face with melancholy, which will disappear after a short while of inactivity.

The aforementioned Big Poes are a variety that only appear in Hyrule Field when Link is an adult, and appear only when Link is riding Epona. These Poes can only be killed with the Bow, as dismounting Epona will make them vanish. Only ten Big Poes exist, and they drop unqiue Big Poe Souls when defeated, which can be sold to the Poe Collector for more Rupees and an empty Bottle as a reward after giving him all ten.

There is also an individual Poe encountered in the Haunted Wasteland called the Phantom Guide. It is a helpful spirit that guides Link to the Spirit Temple through the wasteland, and is necessary to follow to avoid getting lost and starting over.[5] It can only be seen with the Lens of Truth.[6]

The Composer Brothers are a pair of notable Poes that appear in the Kakariko Graveyard, and are fought as enemies if Link disturbs their tombstones before learning the "Sun's Song". After they are defeated, they reveal that they were the song's composers and left it inscribed in the Royal Family's Tomb.[7] The Poe Sisters also appear as mini-bosses in the Forest Temple. These four Poes steal the fire in the central room and impede Link's progress, forcing him to hunt down each Poe Sister before ultimately facing the fourth sister in battle, Meg.

In Majora's Mask, Poes appear identically to those of Ocarina of Time. They carry lanterns with them which remain visible when they are Z-Targeted, and leave behind Poe Souls when defeated. Their Poe Souls can be sold to the Curiosity Shop for a sum of Rupees, though they have little else use aside from profit. Ordinary Poes appear in the Stone Tower Temple. As with Ocarina of Time, Big Poes also appear and drop Big Poe Souls when defeated. All Poes are encountered in the Ikana region and surrounding area.

The Composer Brothers and Poe Sisters make a reappearance in Majora's Mask, appearing around the Ikana region as well. The Composer Brothers were the composers of the "Song of Storms", and playing it to the brother Sharp after learning it from Flat will calm him and revive the dried up Ikana River.[8] The Poe Sisters are optional mini-bosses fought at the Spirit House, and defeating all four earns a Piece of Heart.

In Oracle of Ages, a lone Poe named Allan appears inside a fenced tomb in Yoll Graveyard.

In The Wind Waker, Poes have a distinctively different appearance, and appear as multicolored ghosts with mask-like facial features. Their bodies appear to be sack-like, as their heads are tied up in a knot. They harass Link by ramming, throwing, and burning him with their lamps. If Link attacks them enough to make them drop their lanterns, they can also jump into his body, possessing him and temporarily reversing his movement controls. After the possession is over with, they leave and disappear, as if they had been defeated. The Poes are now permanently translucent[9] until direct light is shone on them using the Mirror Shield (or Medli's Harp in the Earth Temple).[10] The Poes will then become solid and run frantically about the room in an attempt to avoid Link's now effective attacks. They appear in the aforementioned Earth Temple and also inhabit the Ghost Ship, among other places.

The boss of the Earth Temple, Jalhalla, is composed entirely of Poes, and is said to rule over all Poes.[11] It splits into many Poes after being thrown into the spiked walls of the boss room.

In Twilight Princess, four Poes also appear in the Arbiter's Grounds. Similarly to the Poe Sisters from Ocarina of Time, they steal the fire from the four Torches in the central room, thereby impeding Link's progress and must be defeated to retrieve the fire. They can only be seen and attacked as Wolf Link, and carry Poe Souls which can be ripped from them. The last Poe has the strategy of duplicating itself and encircling Link. Along with the Imp Poe encountered in Jovani's house, they are the only Poes required to be defeated in the game.

In Phantom Hourglass, Poes have a radically different look in comparison to their earlier incarnations. They resemble brightly colored puffer fish with body markings, and notably lack lamps. They appear aboard the Ghost Ship and attack by teleporting back and forth, periodically spitting a ball of blue fire at Link. They can only be struck when visible and will actively avoid Link's attacks.

In A Link Between Worlds, Poes are based on those from A Link to the Past. They fly sporadically and circle around the general area. As ghosts, they are able to move through walls as well. Like the Poes of A Link to the Past, they generally take several hits of the Sword to defeat. As enemies they appear in the secret passage connecting the Graveyard and the Sanctuary.

A group of nine Poes also appear in the Lost Woods. They help guide Link to the resting place of the Master Sword, however, they also try to mislead him by moving in tricky formations and having Link follow the correct Poe through the woods.[12] The Poes test him several times doing this. If Link fails and makes a wrong turn, he will have to start over from the beginning. After the Master Sword has been retrieved, they will no longer appear in the Lost Woods, and entering the woods will immediately bring Link back to the sword's resting place.

In Tri Force Heroes, Poes appear in Levels of The Ruins. They appear in four different colors: white, green, red, and blue. The white Poes can be attacked by any Link, however the colored Poes can only be attacked by the Link whose color corresponds with it. Some of the Poes also float at higher elevations, requiring that the Links form a Totem to reach it, with the top Link as the one who matches the target Poe. A Poe boss called the Grim Repoe is also battled in Palace Noir. When the Links enter its boss room, they first encounter three colored Poes and must defeat them to make Grim Repoe appear, however these Poes will actively flee from the Links, making fighting them difficult.

In addition to these Poes, there are also Prankster Poes, Key Bandit Poes, and a Lantern Poe.

A Poe makes an appearance in the Ocarina of Time manga by Akira Himekawa, mocking Link that Hyrule Castle is no more and that Ganon's Tower reigns supreme. Link slashes the ghost with the Master Sword, only to be scolded by Navi to not waste its energy.

Poes appear as enemies in Cadence of Hyrule. They emulate the behavior of the Ghost enemy in Crypt of the NecroDancer, turning intangible and stationary when the player moves towards them and chasing them when they move away.