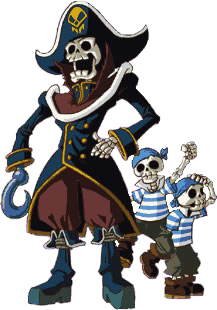 Cap'n
The Piratian are a recurring group of skeletal pirates in The Legend of Zelda series.[1]

In Oracle of Seasons, the Piratians' ship is stuck midways through the Subrosia Cemetery and the Samasa Desert.[2] While the Piratians have made their residence in the House of Pirates,[3][4] Link must find the Rusty Bell in the Samasa Desert after the Cap'n of the Piratians deems him worthy of the task. Once given the task of locating and bringing back the bell, Link is able to relieve the Piratian who has been unsuccessful in his mission to find the missing bell, which will enable Link the ability to open the desert gate with the combination learned from a crew mate earlier. Upon entering the front end of the ship found in the desert, Link will find the ghost of a Piratian who can not move onto the afterlife until he finds the Captains missing Bell.[5][6] The pirate asks Link to help find the bell, suggesting that he start by finding his skull rolling out in the desert.[7] The skull can be found in the small northeastern oasis, and will inform Link that he can help by being carried around the desert.[8] It can be picked up with the Power Bracelet, and will shout out if dropped,[9][10] and even yell out more if lost in the quicksand.[11] The skull will always reappear in the oasis, regardless of how it was lost. After finding the Rusty Bell, the Piratian's skull will disappear after claiming that it can finally rest.[12] Upon showing the Captain the Rusty Bell, he will tell Link of its unacceptable condition,[13] forcing Link to bring it to the Subrosian Smithy for polishing. Receiving the polished bell brings the Piratian Captain around, where he then decides to move the ship, allowing Link to reach the Explorer's Crypt.

In Oracle of Ages, Link must bring to the Piratians the Zora Scale, which can dissipate the whirlpools, allowing them to sail on the Sea of Storms. In return, they give Link the Tokay Eyeball, necessary to pass the Sea of No Return. In a Linked Game, the Piratians only appear in the present.

The Piratians make an appearance in the Oracle of Ages manga by Akira Himekawa. A piratian enters the Captain's cabin and informs him that two castaways were fished from the sea.[14] The Captain asks him to describe the two.[15] The piratian says the castaways are two little brats.[16] The Captain says to toss them below deck for use later, before changing his mind and asking for them.[17] A piratian escorts the castaways, Link and Ralph, to the cabin as another piratian leaves.

When the Captain sets the ship on course for Labrynna,[18] a piratian says it is no use, they will sink.[19] He tells the piratian to stop wailing and the others begin to work.[20] Link and Ralph try to escape the ship but are confronted by the Captain and the piratians. As piratians attack him, Ralph says he cannot die for he has to find Nayru.[21] Link promises the Captain that if they leave, they can fix everything for him, his crew, and his lady.[22] A piratian expresses concern for the Captain as he staggers to one knee.[23] The Captain tells the piratians to give Ralph and Link a boat.[24] The piratians watch as their Captain gives Link a locket and message for his lady.[25] They then disappear on the ship as the storm rages on.