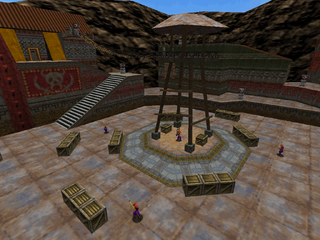 The interior of the Fortress

Gerudo Pirate ×3
The Pirates' Fortress is a mini-dungeon in Majora's Mask.[1][note 1]

Entrance to the Fortress

The Fortress is located on the Great Bay Coast and can only be accessed by Zora Link, for the entrance is blocked by wooden planks underwater. It is the hideout for a gang of Gerudo Pirates who have stolen four of the Zora Eggs from Lulu and plan on ruling the Western Ocean.[3] It is also here that Link overhears the leader of the Pirates, Aveil, saying that the other three eggs were taken by sea snakes in Pinnacle Rock.[4]

Once Link has obtained the Zora Mask, he must find the boarded up entrance to the Fortress, and then crash through it. Like the Gerudo's Fortress in Ocarina of Time, Link must use his stealth abilities in order to get to the inner part of the Fortress, which is where the four Zora Eggs are hidden. The outer part of the Fortress is mostly covered in water with Gerudos patrolling the entrance while riding in boats, so Link will need to use his abilities as Zora Link extensively to be able to get through the traps and enemies that await him. Once inside the inner Fortress, the Gerudo Pirates will increase in numbers, requiring Link to use his Bow and Arrows to stun the thieves and get through them. If Link is caught, he will either be thrown to the outer part of the Fortress or back outside at the Great Bay Coast, depending where he is initially found. The Pirates' Fortress is an intricate maze that consists of many doors and other entrances to go through.

The main treasure is the Hookshot, which the Pirates stole from the Fisherman.[5] It is found in a Treasure Chest guarded in a room where Aveil is seen arguing with one of the Pirate leaders. The only way to obtain the item is to frighten the Pirates away by releasing the Bees living in the hive above the room. Link can shoot the hive from a portion of the room accessible through an alternate entrance with his Bow. In addition to the Hookshot, one of the Zora Eggs is found there as well.

Once the Hookshot is acquired, new areas of the Fortress become accessible. As Link explores them, he must fight a Gerudo Pirate before going into each room keeping a Zora Egg. If he takes a certain amount of damage during the battle, he gets thrown out. When the Gerudo Pirate is defeated, the door to the Zora Egg room opens, allowing Link to scoop the egg inside an empty Bottle and take it to the Marine Research Lab for them to hatch properly.

An easier way to get through the Fortress is to use the Stone Mask. This makes Link invisible to enemies, so the Pirates will not be able to see him and, therefore, will not be able to throw him out. However, the Stone Mask does not work on the Gerudo Pirates that are fought before each of the Zora Egg rooms, so wearing the mask while fighting them is useless.[6] Aveil can also see Link even while he wears the mask.[7] In Majora's Mask 3D, Link receives the Stone Mask from Shiro while inside the Fortress.