Zelda Wiki
Register
Don't have an account?
Sign In
Advertisement
in: Locations in Spirit Tracks, Hideouts, Locations,
and 2 more 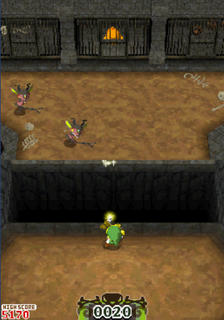 The Pirate Hideout is a location and Mini-Game in Spirit Tracks.[1]

Situated in the Ocean Realm just north of Papuchia Village, the hideout can only be accessed after Link receives a Force Gem from the Fish Saleswoman for bringing her Mega Ice to keep her Fish fresh. By doing so, part of the Spirit Tracks of the Ocean Realm are restored, opening the Train Station for the Pirate Hideout.

The Hideout is home to many Miniblins and a Big Blin, where they keep a captured resident of Papuchia Village in one of their cells. Link can rescue the man by taking part in a sort of mini-game that involves shooting as many Miniblins as possible using the bow and an unlimited supply of arrows. By shooting Miniblins consecutively, Link will receive more points. The first part of the mini-game consists of hitting the enemies as they walk across the upper part of the DS screen while Link stays on the other side of the hideout. Eventually, once enough Miniblins have been destroyed, the prisoner and Link will get on a small type of Mine Cart to escape the hideout. As they make their way out, Miniblins will continue to follow the pair. On both occasions, if Link takes too long to defeat a Miniblin, it will throw a cage at the young hero, and if it's not destroyed using an arrow, it will capture Link, ending the rescue.

At the exit of the hideout is a Big Blin. Link must shoot enough arrows at it to defeat it completely, making their escape successful. Once the young hero takes the resident back to Papuchia Village, he will reward Link with a Force Gem, which establishes more Spirit Tracks in the Ocean Realm and makes way to several shortcuts in the realm.

Link can go back to the Pirate Hideout and play the same minigame, except this time he will have to rescue a Goron. If he scores between 3000 and 4000 points, he will be rewarded with a bigger quiver. Scoring 4000 points or more will win him a Heart Container. If Link scores 5000 points or more, the Goron will admit that he let the pirates catch him so he could steal their treasures. After completion, the rescued Goron will tell Link that his friend has been captured by pirates, creating a neverending cycle.

Additionally, every Miniblin killed with a Light Arrow will earn 10 additional points, regardless of the multiplier.

Hideouts in The Legend of Zelda series
Community content is available under GNU Free Documentation License unless otherwise noted.
Advertisement