It is a simple Pirate's cutlass and a magically-infused flintlock pistol. Befitting Tetra's origins as a seafaring pirate captain, the Pirate Cutlass has a Water Elemental Attribute and can fire bullets that can create a pool of water that break down enemy defenses.

Its presence in Hyrule Warriors & Hyrule Warriors Legends as a weapon used by the pirate Tetra is likely a reference to use of both flintlock pistols and cutlasses by pirates during the Golden Age of Piracy. 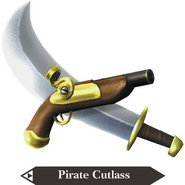 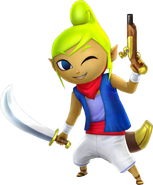 Retrieved from "https://zelda.fandom.com/wiki/Pirate_Cutlass?oldid=514727"
Community content is available under CC-BY-SA unless otherwise noted.