Pipit is a character from The Legend of Zelda: Skyward Sword. He is a senior at the Knight Academy who resides in Skyloft with his mother, Mallara. As a senior of the academy, he wears the male Knight uniform, which consist of a yellow tunic and floppy hat with a set of chain mail underneath and baggy tights with brown boots. He is also the night patrol of the academy.

Pipit became a senior at the Knight Academy when he won the last year's Wing Ceremony in a close race, pulling ahead at the last second. He has a crush on Karane, another senior student. When he learns from Link that Cawlin is seeking to make Karane his girlfriend, Pipit hurriedly steps in and wins her over. He then gives Link five Gratitude Crystals as thanks.

If Link approaches Pipit's house at night after helping Mallara clean it, he will overhear Pipit yelling at his mother for using his money to pay someone to clean the house, rather than doing it herself and using the money to buy bread. Pipit then walks outside and spots Link, asking him if he overheard what happened. If Link admits to overhearing the conversation, Pipit admits that he is working the night shift at the Knight Academy not for the honor, but to earn some extra money. He then mentions never to talk about it again. Despite this, Link can still clean Pipit's house for Mallara every night for extra money.

As many residents of Skyloft seem to be named after birds, it is possible that Pipit is named after the pipit. 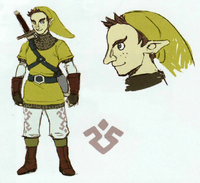 Concept artwork of Pipit
Add a photo to this gallery

Retrieved from "https://zelda.fandom.com/wiki/Pipit?oldid=455778"
Community content is available under CC-BY-SA unless otherwise noted.