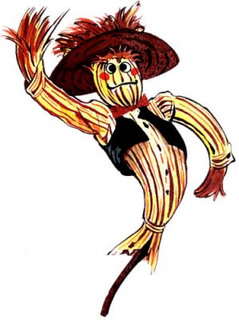 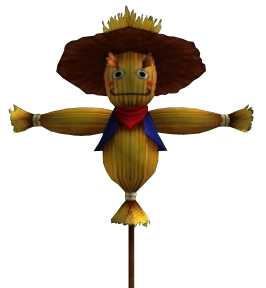 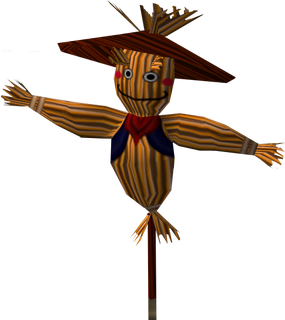 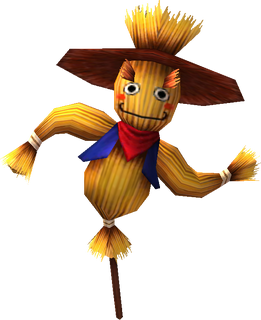 Pierre is a recurring character in The Legend of Zelda series.[1]

In Ocarina of Time, Pierre is a scarecrow that appears in Lake Hylia. He considers himself to be a wandering scarecrow, but is unable to explore Hyrule for "soul-moving sounds" since he is stuck in one place.[2] Link can play a rather lengthy melody for him (even the melodies already included in Ocarina of Time), which Pierre will replay every time the hero speaks to him.[3]

When Link reminds Bonooru of the "Scarecrow's Song", the scarecrow will offer the services of his friend Pierre, who by this time has gone to wander around the land.[4] Whenever Navi flies off to a faraway area and turns green, Link can play the "Scarecrow's Song", making Pierre spring out of the ground. Once summoned, Link can grapple onto Pierre with the Hookshot to allow him to reach previously inaccessible areas.

The melody played to Pierre is also played with various different instrument sounds after the game's finale scene has been idle for several minutes; however, this only works in the Nintendo 64 versions of the game, and not for the GameCube and 3DS versions. This is because in the GameCube version the ending is a pre-rendered video and in the 3DS version Grezzo's ending plays right after.

In Majora's Mask, Pierre appears in both the Trading Post and the first floor of the Astral Observatory, claiming to be wandering in search of "pleasant music."[5] He serves much of the same function as in Ocarina of Time. The "Scarecrow's Song" can be taught to him,[6] which can be used to summon him in areas where Tatl flies off to. Link will have to teach him a new "Scarecrow's Song" every time he resets the three-day cycle, however.

Pierre also teaches Link the "Inverted Song of Time" and the "Song of Double Time", which slows down time and changes the time of day to the following night or day, respectively.[7] If Link agrees to dance with him, the scarecrow will dance to "Saria's Song". Doing so will have the same effect as playing the "Song of Double Time". Therefore, Pierre will not dance on the Night of the Final Day.[8]