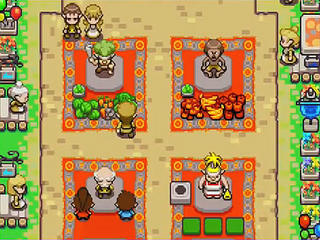 Annually
The Picori Festival is an event in The Minish Cap.[1]

It is an annual celebration which commemorates the coming of the Minish,[2] who helped drive evil away from the land by granting the Hero of Men the Picori Blade and the Light Force.[3] The tale details that the Minish show themselves every 100 years, when the Minish Door, the link between their world and the world of men, opens,[4] and only to children.[5] Held in Hyrule Town, the Festival includes a Sword-Fighting Tournament wherein the winner is allowed to touch the sacred Picori Blade.[6][7] During The Minish Cap, the Festival is the one hundredth annual occurrence since the last time the Minish showed themselves.[8] Vaati wins the Tournament and shatters the Picori Blade, causing the evil it had sealed away to return to plague Hyrule.

In the beginning of The Minish Cap, Link attends the Festival with Princess Zelda. At the center of the Picori Festival lie four stands: Brocco's vegetable stand, Beedle's fruit stand, Pina's minigame stand, and a final stand where Marshall, a Hyrule resident, tells of the Minish legend. To the north of the Picori Festival stand two people from the Wind Tribe (Gale and Hailey), and a Vassal stands by the Funday School.

Shortly after completing Deepwood Shrine, the Picori Festival will have already ended, and the town square returns to a normal marketplace.