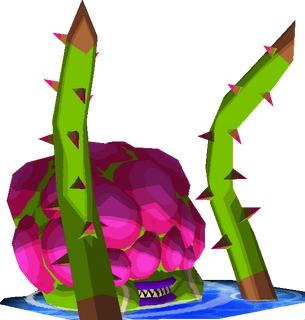 Phytops is the third Boss in Spirit Tracks.[1] It appears to be a cross between an Octorok and a thorned plant who resides in a pool atop a giant pillar in the Ocean Temple.

Phytops resides on a pillar of grey stone that has a large pool of water at the top. The Whip is necessary to climb to the top of the pillar, as there are several pegs sticking out of the wall that are necessary to traverse. However, as Link makes his way to the top, the thorned tentacles of the beast will attempt to attack the young hero, though grabbing one of its thorns with the Whip and throwing it back to its open eye will force them to retract. Moreover, Phytops will occasionally launch a purple slime that Link must dodge. Once Link reaches the top of the pillar, he must grab onto a propeller by using the Whip, where it will take him to the pool where Phytops is.

Phytops will start attacking with his tentacles as soon as the fight begins. A smack with the Whip will send a tentacle reeling back to its master. Link's main objective is to find and attack the beast's Weak Point, its eye, although at the beginning, it is being concealed by the pink blobs that are all over his head. While Phytops' tentacles surround Link, he must grab one of the thorns from its tentacles with the use of the Whip and throw it back at the monster, which will uncover part of its eye. Repeating this process again reveals the full eye, so Link must throw a third thorn to the eye to make Phytops approach the end of the pool, where it will drop its head at the edge and allow Link to repeatedly attack its open eye with the Sword.

After being hit once, Phytops begins to strike back more violently, firing globs of purple acid from concealed funnels in its head. Link must first avoid these projectile blobs. Phytops will also begin to attack Link with all four tentacles, two giving him a small range of movement and two actively attacking him. After a while, the beast calms down and the fight resumes. After the second hit, however, Phytops will revert to attacking rapidly with four tentacles. After being hit enough times[how many?] in the eye with Link's Sword, Phytops ultimately falls, giving up a Heart Container and a Blue Force Gem.

Phytops' name may be derived from "phytoplankton," a microscopic kind of marine creature that can photosynthesize like a plant, hence its plant-like body, and "cyclops," denoting its single eye. Its European name, Cactops, likely comes from "cactus," referring to the many thorns on its tentacles, and again "cyclops."