It has been suggested that this article be moved to Picture. 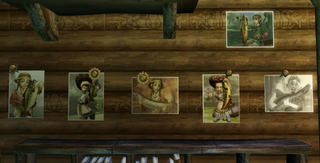 Link can show a color Pictograph of a character or enemy to Carlov at the Nintendo Gallery in exchange for a Figurine of the subject. Despite Carlov only accepting color Pictographs, he accepts any sepia-toned Legendary Pictograph.

The Wind Waker HD also features a "selfie" mode in which Link can include himself in the Pictograph. By holding the left stick in certain directions, Link can display various expressions. Also, a golden Carlov icon appears over Pictographs that are suitable for turning them into Figurines.

In Twilight Princess, several Photos of Hena and her siblings can be seen inside her hut in the Fishing Hole. A Photo of the Fishing Hole Man from Ocarina of Time also appears, with Hena claiming that he may be her ancestor.[6] A Photo of Link can also be added after catching the Hylian Loach.

In Tri Force Heroes, Link can obtain a Camera from the Photo Bro at the Miiverse Gallery. With it and while in the Drablands, Link can take single Photo per level, which is saved in the gallery's album. Link can then talk to the Photo Bro to post any of the Photos onto Miiverse.