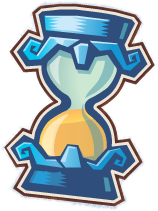 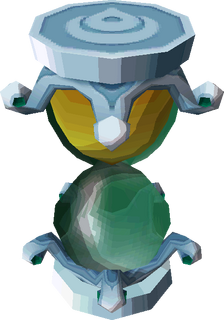 Link obtains the Phantom Hourglass after he receives the Spirit of Power, and returns to the Temple of the Ocean King for a second time. Once he enters the temple, Oshus will go in as well and tell him to retrieve the hourglass from the pedestal in the first room. The Phantom Hourglass, which initially has 10 minutes worth of Sand of Hours, is crucial in the game in order to be able to survive the Temple of the Ocean King. As long as it has Sand of Hours in the top portion, it protects Link from the life-draining curse within the temple. However, any time spent inside the temple, except while in Safe Zones, depletes minutes from the hourglass. If Link gets hit by a Phantom, he will lose 30 seconds worth of time, and if he gets hit by a Wizzrobe, they will steal 15 seconds of Sand of Hours. In order to refill the Phantom Hourglass, Link needs to go out into the sunlight to instantly recharge it. Additional temporary time upgrades can be found throughout the temple, which can be easily spotted since they have the shape of the hourglass. These will not add to the total Sands of Hours and will just recover up to 30 seconds worth of sand.

Whenever Link defeats a boss, his hourglass gets two extra minutes of sand.[2] In addition, by collecting five specific Treasure Maps, five extra minutes can be retrieved from chests on the bottom of the sea through the use of the Salvage Arm, making the maximum capacity of the Phantom Hourglass to be 25 minutes of Sand of Hours.[3]

After Zauz finishes making the Phantom Sword from the three Pure Metals, he will comment that Link must take the sword to the Ocean King so that he can add the Sound of Hours and empower the Phantom Sword with the ability to control time, which is necessary to ultimately defeat Bellum.[4] When the young hero goes to Oshus, the old man fuses the Phantom Hourglass into the Phantom Sword, thus completing the sword.

In the final two boss battles, Link gains the ability to use the Hourglass to temporarily freeze time, as long as he has a Phantom Sphere, given to him by Ciela, Link's fairy partner. To use the Phantom Sphere, Link must draw the shape of the hourglass, a figure eight, which will successfully make time stop.[5]

Time in The Legend of Zelda series
Community content is available under GNU Free Documentation License unless otherwise noted.
Advertisement