Zelda Wiki
Register
Don't have an account?
Sign In
Advertisement
in: The Wind Waker Pages with Invalid or Missing Terms, Ghost Enemies, Giant Bosses,
and 11 more 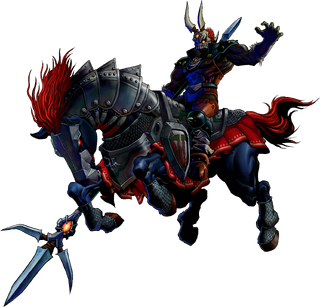 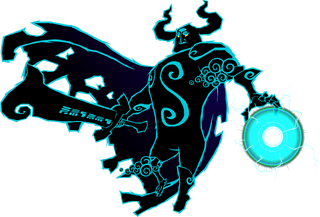 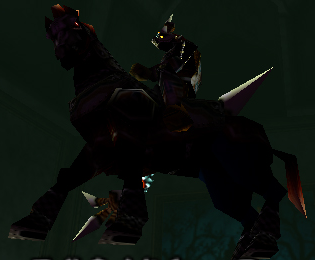 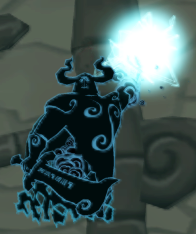 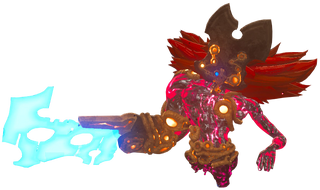 Phantom Ganon is a recurring Boss in The Legend of Zelda series.[2][3][note 1]

In Ocarina of Time, Phantom Ganon is the boss of the Forest Temple.[5] Once the battle starts, Phantom Ganon jumps into one of the six paintings around the room. Afterwards, it and two replicas will ride to the front of three paintings. The real one can be spotted by its lighter color. A purple vortex then appears revealing the real Phantom Ganon.[6] As Phantom Ganon jumps out of the painting, Link can shoot it with the Fairy Bow. If the Arrow misses or is delayed, it summons an electric ball on the ground that scatters across the platform. This can be avoided by standing on one of the Triforce images on each corner of the platform. After three shots, Phantom Ganon leaves its horse, starting the second part of the battle.

Phantom Ganon now attacks by shooting an energy ball from its staff at Link while hovering over the ground. Link can hit the ball back with the Master Sword or a Bottle. After enough hits, Phantom Ganon falls to the ground paralyzed, where it can be hit multiple times with the Master Sword. When its health is halved, Phantom Ganon can also attack by twirling his staff a few times and then charging at Link, dealing three hearts of damage. Once defeated, he is banished to the gap between dimensions by Ganondorf[7] and Link receives a Heart Container as well as the Forest Medallion.

During its fight in Ganon's Castle, Phantom Ganon is accompanied by four illusions of itself. It now also attacks by throwing dark energy balls, which splits into a group of small bursts of energy flying towards Link. These can be sent back at it with a Spin Attack. After just one hit, Phantom Ganon disappears, leaving its Sword behind with the handle pointing at the door Link must open to advance.[11] Once the Light Arrows are found, they must be shot at Phantom Ganon once stunned in order to finally defeat it.

Link can grab Phantom Ganon's Sword to attack; however, it must be hold with both hands, leaving Link unable to use his Shield. After defeating Phantom Ganon in Ganon's Castle's labyrinth, Link must throw its Sword at the brick wall to gain access to the top of the Tower.[12]

In Breath of the Wild, Windblight Ganon, Thunderblight Ganon, Fireblight Ganon, and Waterblight Ganon are all collectively known as Phantom Ganons.[3] They are Calamity Ganon's creations that he sent out to the Divine Beasts, resulting in the death of the Champions.[13][14][15][16] When Link tries to activate the Main Control Unit of a Divine Beast, these Phantom Ganons will appear, and they must be defeated in order to continue.[17][18][19][20] When Link is victorious, a Heart Container will drop, and he will have access to the Main Control Unit.

Phantom Ganon appears in the Ocarina of Time Manga first appearing in Chapter 2: "The Sage of the Forest: Saria", answering Ganondorf's call to guard the Forest Temple and strike down the Hero of Time. When Link and Mido walk by a painting of Ganondorf, Phantom Ganon attacks. Despite a good fight, Phantom Ganon is defeated when Mido throws Link the Bow, defeating the specter of the King of Evil and releasing Saria from the painting.

In Hyrule Warriors Legends, Phantom Ganon appears as a Giant Boss, and as the main villain of the Wind Waker series of Scenarios in Legend Mode. He had stolen Cia's dark magic and the Triforce of Power from Lana, creating a new dimensional rift that summons the world from the Era of the Great Sea. He is eventually defeated by Link, Lana, Tetra, King Daphnes, and Cia.

In battle, Phantom Ganon wields his sword, which he uses for various spin attacks. He is able to vanish and reappear closer to enemy Warriors for a surprise spin attack, or alternately to create copies of himself to surround and attack the Warrior. His projectile attacks consist of raising both of his arms to create many homing energy balls, or to simply create a single white energy ball. The latter can be used to expose his Weak Point Gauge if bounced back at him by striking it. Phantom Ganon has no specific weakness to any item, and the only way to damage him is by reflecting his own attacks at him.

After his health has been reduced to about half, he summons a second sword and switches his battle style to melee, using the two blades to violently hack at the enemy Warrior. He also lowers his hovering altitude, making himself reachable to attack, but will always shield himself similarly to wind waker Ganondorf if attacked at the front or the sides. His backside, however, will become vulnerable to attack. After striking his back enough times, he will fall to the ground, exposing his Weak Point Gauge.

When defeated, Phantom Ganon will occasionally drop his Cape as a silver Material, and rarely, his Sword as a gold Material.