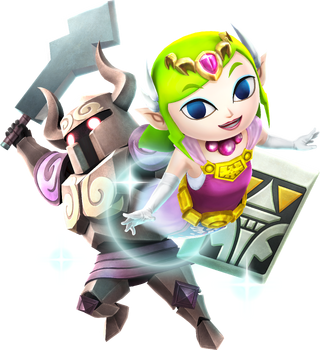 Toon Zelda and a Phantom wielding the Protector Sword

Defeating enemies
The Phantom Arms are a class of Weapon used by Toon Zelda in Hyrule Warriors.[name reference needed] They are associated with Light. The Weapon takes the form of different Phantoms, which Toon Zelda possesses and uses to fight, as well as to harness their abilities. The Phantoms, along with their abilities, are all based on those from Spirit Tracks.

The default form of the Phantom Arms is the Protector Sword. The second form is the Warp Sword, followed by the Wrecker Sword.

Against Captains and Warriors, Toon Zelda raises her sword as it charges with light energy, then slices through her enemies, unleashing a beam in its wake. Against Giant Bosses, Toon Zelda uppercuts the boss with her sword. She then curls into a wrecking ball and comes crashing down onto the boss's weak spot.

In a surrounding radius, Toon Zelda leaps out of the Phantom vessel and unleashes a shining burst of light on her enemies.

Upon activation, Toon Zelda takes a brief look at her sword and shield and strikes a heroic pose with her blade in the air. During her Focus Spirit Attack, Toon Zelda builds up the Phantom powers within her before warping into the air above and crashing down onto her enemies as a wrecking ball. When the Focus Spirit gauge is depleted, two Rats appear and start circling around her. Toon Zelda quivers in fear and then jumps out of the Phantom's body, at which point a blast of light bursts out of the armor as she screams loudly, before returning to her Phantom vessel.