This page is about the enemy in Phantom Hourglass and Spirit Tracks. For other uses, see Phantom (Disambiguation) 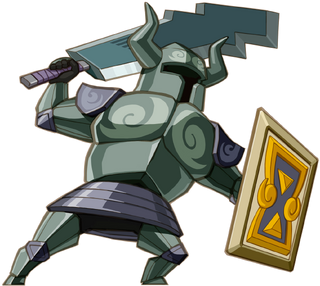 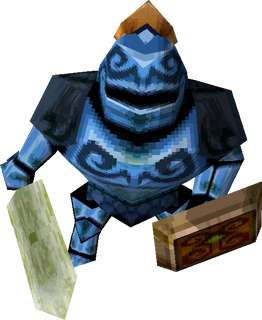 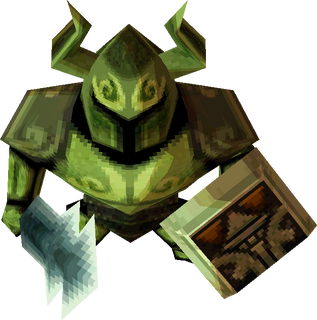 Bow
Pit
Sword
Grappling Hook (PH)
Hammer (stun only) (PH)
Wrecker Phantom (ST)
Phantoms are recurring Enemies in The Legend of Zelda series.[1][2] They serve as guardians for the Temple of the Ocean King and the Tower of Spirits in Phantom Hourglass and Spirit Tracks, respectively.

A Phantom is an extremely powerful enemy, able to knock out Link with only one swipe of its sword. They appear in many varieties, most with different abilities. These enemies are presented in a similar fashion in both Phantom Hourglass and Spirit Tracks. When a Phantom attacks Link, it forces him to automatically return to the door from which he entered the area, but it will only cost him one heart of his health. Phantoms are nearly indestructible, so naturally, Link must sneak around them rather than attack them head-on.[3] With its strong armor, a Phantom can walk straight through spikes, fire, and even lava without damaging itself. Despite their durability, they can be briefly stunned by being hit in the back, and some weapons and methods are capable of defeating them.

In both of their appearances, Phantoms' locations can be viewed on Link's map, along with a cone indicating their line of sight.[4] Phantoms follow preset paths, although if they detect Link they will shout threats at him and relentlessly track him down.[5] The Phantom is able to track Link by sound or sight, although it cannot enter or see into "Safe Zones".[6][7] As such, if Link escapes into one, the Phantom will give up on chasing him and return to its patrol.

Phantoms are sometimes aided by subordinate creatures called Phantom Eyes. These enemies fly through corridors, searching for intruders. If they spot Link, they will chase him, letting out a ringing sound to alert Phantoms. If one follows Link too long before he can reach a Safe Zone, it will entangle him and impede his movements to allow the Phantoms to catch him.[8] Because they follow sound, Phantoms will go investigate loud noises, such as explosions set off by Bombs or the clanging of a Sword, but this can be used to Link's advantage if he needs to trick a Phantom into leaving its post.[9]

In Phantom Hourglass, Phantoms patrol the Temple of the Ocean King. When one attacks, it steals 30 seconds worth of Sand of Hours from the Phantom Hourglass. However, after the abilities of the Spirit of Wisdom have been fully restored and equipped, the amount of time lost will be cut down to between five and ten seconds.

Phantoms in Phantom Hourglass are invincible to all weapons barring the Phantom Sword, which was created specifically for defeating them. However, there are two ways to defeat a Phantom without using the Phantom Sword: the first is to push a rolling boulder into the path of a Phantom and crush it, and the second is to continuously cause it to fall into a pit. Phantoms are also able to pick up Small Keys and Force Gems, thus requiring Link to stun or slay them to obtain the treasure.[10]

After the Ghost Ship is cleared, Oshus reveals that Phantoms are emanations of Bellum, which created them from the Sand of Hours to protect itself as well as obtain more Life Force.[11]

The Phantoms are also playable within Phantom Hourglass' multiplayer Battle Mode. Here, players will take turn playing as Link and the Phantoms in a game of competing to collect Force Gems.

Throughout the Temple of the Ocean King, Link will encounter three types of Phantom, two of which have their own special abilities. Another type is seen only in the multiplayer mode.

A red-armored Phantom which can run faster than Link, as well as pick up dropped items.

A gold-armored Phantom which initially moves slowly, but can teleport to follow Link if he is spotted by a Phantom or Phantom Eye.

Three Phantoms that only appear in the multiplayer Battle Mode. They are basically a normal Phantom in gray armor, though they can pick up power-ups to activate obstacles on the field or empower themselves. However, they cannot pick up Force Gems. They can always see Link, with the exception of when he is in a safe zone.

In Spirit Tracks, Phantoms return as guardians of the Tower of Spirits. While normally these Phantoms will not harm innocent people, they are corrupted by evil spirits due to the disappearance of the Spirit Tracks.[12] Because of this, they attack Link, thinking he is an intruder. They behave and attack much like the Phantoms in Phantom Hourglass, although this time around they cannot be completely defeated. When a Phantom is somehow destroyed, such as if it sinks into sand, it will reappear in its original position.

Phantoms are an important element in Spirit Tracks because, due to having her spirit separated from her body, Princess Zelda can possess Phantoms, becoming Phantom Zelda, which is needed to climb higher into the Tower of Spirits. To take control of a Phantom, three Tears of Light in the area must be collected beforehand. Link is then required to strike the back of the Phantom with his sword, which stuns the Phantom and allows the princess to take control of it.[13] After she does so, the eyes of the Phantom glow and its armor turns pink. Once the Lokomo Sword is acquired, the Tears of Light are not necessary to power the sword, as it already contains the power necessary to stun the Phantoms. Alternatively, Link can strike the back of a Phantom with an arrow from the Bow of Light to stun it enough to possess it.

When Princess Zelda possesses a Phantom, she can speak to them, through which Link can obtain information about the area that the Phantom patrols. It can provide insight into a Phantom's everyday life. Evidently, they treat their job like a normal person would treat any other, mentioning things from their day-to-day life like how "Bob quit last week," or how the "break room is a broom closet."

Complete list of Phantom Quotes
Some text differences exist between the North American (NTSC) and European (PAL) localizations of the game.

Including the regular Phantom, there are four types of Phantoms in Spirit Tracks. When Zelda possesses a Phantom, she will also inherit all of the abilities that the specific Phantom has.

A Phantom equipped with red armor and a flaming sword. Its sword can illuminate dark rooms, light up torches, and stun Nocturns that haunt the corridors in the upper dark rooms in the tower.[14]

A blue-armored Phantom with the ability to warp anywhere within a room. Under Zelda's control, the Warp Phantom is limited to only warping to the locations of Phantom Eyes.[15]

A black-armored Phantom that can transform into a boulder, stun other Phantoms by rolling into them, and break through cracked blocks and other obstacles.[16]

A Phantom possessed by Toon Zelda appears as her Phantom Arms Weapon in Hyrule Warriors. In Hyrule Warriors, it is part of the Phantom Hourglass & Spirit Tracks DLC pack.

Phantom Zelda appears as Zelda's down special move in Super Smash Bros. for Nintendo 3DS / Wii U, replacing her Sheik transformation from previous games. The attack, called the Phantom Slash, can be used as either a ranged attack or as a way to block incoming attacks or projectiles. The move can be charged, causing the Phantom to travel farther, as well as adding a second attack. If the Phantom takes at least 13% of damage, it will be destroyed. Zelda will then have to wait 6 seconds in order to summon it again. It also appears as a Trophy in Super Smash Bros. for Nintendo 3DS.

In Super Smash Bros. Ultimate, Phantom Zelda once more serves as Zelda's down special move. The Phantom functions slightly different than its appearance in Super Smash Bros. for Nintendo 3DS / Wii U. Zelda also has a new victory animation where she poses alongside a Phantom. Phantom also appears as a Spirit which can be enhanced into the Spirit, Phantom Zelda.