Zelda Wiki
Register
Don't have an account?
Sign In
Advertisement
in: Enemies, Common Enemies and Traps, Birds,
and 6 more

Please improve it as you see fit. Editing help is available.
This article has been flagged since October 2019. 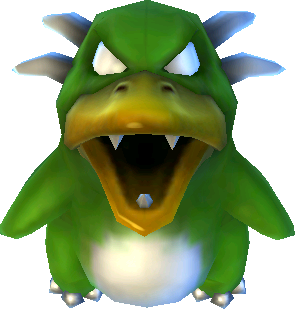 Bombos Medallion (ALttP | FSA)
Sword (Series)
Hookshot (Series)
Fire Rod (Series)
Pengators are recurring Enemies in The Legend of Zelda series.[2] [name reference needed] They appear as a hybrid of Alligator and Penguin. They can be commonly found in cold regions.

In A Link to the Past, Pengators usually reside in the freezing catacombs of the Ice Palace Dungeon. Pengators make their domain on sheets of ice, which aids their assaults and causes difficulty for their prey. They lunge at their quarry at high speeds, sliding across the ice on their stomachs with their mouths open, showing their razor-sharp fangs.

In A Link Between Worlds, Pengators appear in the Ice Ruins and the Treacherous Tower, and are very similar to their appearance in A Link to the Past. In the Treacherous Tower, six Pengators appear on floor 14 of the Advanced Level, which Link must fight in order to progress to the next floor. In the Ice Ruins, four Pengators fight Link alongside a Big Pengator, a larger variant of Pengator, as the Sub-Boss.

In Cadence of Hyrule, Pengators, like other enemies, move to the beat of the music. Blue Pengators make their debut as stronger variants.

The name Pengator might be a combination of the the words, Alligator and Penguin.[citation needed]