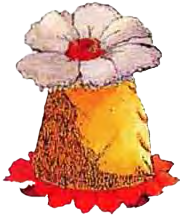 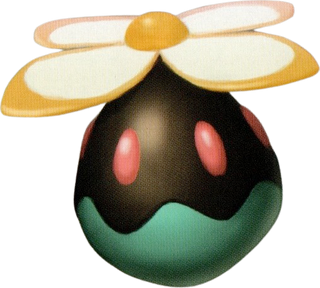 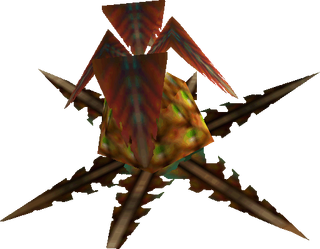 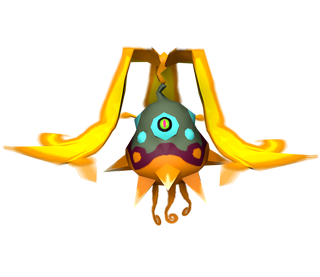 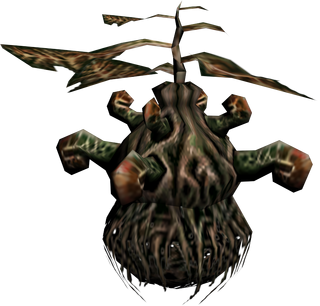 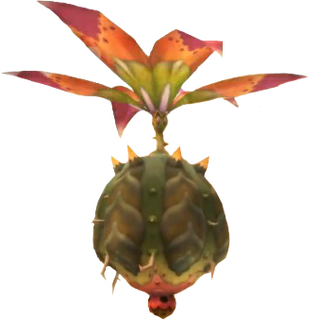 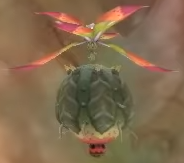 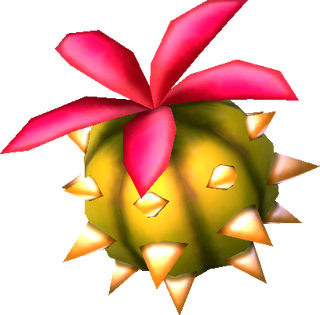 Peahats,[3][name reference needed] formatted as Pea Hat in the Nintendo 64 version of Majora's Mask, are recurring Enemies in The Legend of Zelda series.

Peahats are flying plant or flower-like enemies. They propel themselves into the air with the use of their petals or leaves that are located either at their base or top, and achieve flight by rapidly spinning them, similar to helicopter blades. While in flight, they are beyond the reach of nearly all attacks; however, in most games, they cannot maintain flight for very long and eventually stop to rest. They can often be found in groups across various regions; mostly in fields or deserts, but occasionally within Dungeons as well. According to The Legend of Zelda manual, they are the spirits of dead flowers.[4]

While most Peahats are hostile in The Legend of Zelda series, others appear as benevolent fauna that Link can use to aid him in his quest. Twilight Princess and Skyward Sword feature harmless Peahats that can fly perpetually, and whose bases may be grappled onto using the Clawshot. These Peahats may move in a predetermined path, and act as transportation as Link is carried overhead.

Peahats in The Legend of Zelda are enemies found in the Overworld of Hyrule. They primarily congregate in the deserts and mountains of northeastern Hyrule, but also appear in smaller numbers near the Lost Woods. Peahats flutter through the air, during which they are impervious to all attacks. They will periodically stop to rest before taking flight again, leaving themselves vulnerable. Peahats always appear in small groups, and often move in sporadic patterns, making them difficult to dodge at times. As they can fly across the entire screen, it is also possible for them to land on top of walls and trees, leaving them out of reach to attack. When defeated, Peahats may drop either a Heart, a Fairy or one Rupee.[note 1]

Peahats in Link's Awakening behave identically to those from The Legend of Zelda; however, they only appear inside Dungeons, and can be found in the Angler's Tunnel, Eagle's Tower, and Turtle Rock. Peahats appear in small groups, swiftly fly through the air, and periodically land, leaving them vulnerable to attack. Like their appearance from The Legend of Zelda, Peahats in Link's Awakening can fly across the entire screen, and may stop to rest on a wall or even in the middle of a pit.

Peahats in Ocarina of Time take on a much different form than previous appearances, resembling gigantic fruit-like plants with propeller leaves at their base. They only appear in the northern and southern corners of Hyrule Field when Link is a child, away from any paths and crossroads. During the day, they sit quietly, and at night bury themselves into the ground with only their blossom showing. While Peahats will not actively search for Link, they will be provoked if he enters into their territory, and will uproot themselves and fly after him in attack. They attack either by swooping down at him with their leaf-like blades, or create Peahat Larvae, which are smaller versions that swarm after him. If attacked at night, Peahats will only release Peahat Larvae and will not emerge. Peahats' weak spots lie in the tiny root beneath their base. This root can be struck with the Kokiri Sword to inflict damage.

Peahats are the only enemy that will drop two different kinds of loot at once, but on an uncommon basis.

A single Peahat is found in Majora's Mask, in a Grotto in Termina Field. When defeated, a Treasure Chest containing a Piece of Heart is revealed.

Peahats in Oracle of Seasons appear identically to their Link's Awakening incarnation. They flutter through the air, during which they are invincible to all attacks, becoming vulnerable only when they stop to land. Like previous incarnations, they can still potentially land on a wall or other obstacles. They appear in the Overworld as well as Dungeons, and can be encountered in the Eastern Suburbs, the Woods of Winter, North Horon, Poison Moth's Lair, and Unicorn's Cave.

Peahats in Oracle of Ages appear identically to their Link's Awakening incarnation. They flutter through the air, during which they are invincible to all attacks, becoming vulnerable only when they stop to land. Like previous incarnations, they can still potentially land on a wall or other obstacles. They can be found in the Wing Dungeon, Moonlit Grotto, Skull Dungeon, and Hero's Cave.

Peahats in The Wind Waker are much smaller, appearing as bulbous plants with long, feather-like flowers. They are encountered on many islands, but primarily congregate in the Forbidden Woods. Unlike previous incarnations, these Peahats do not stop to rest, and their flower-like propeller blades block Sword attacks, requiring them to first be stunned by another item. If Link uses the Deku Leaf, they will be blown back and stunned with the gust of wind it produces. The Boomerang can also be thrown to slice their petals off; however, the petals will regrow. Peahats may drop Golden Feathers when defeated, which the Grappling Hook can also steal from them.

Peahats in The Minish Cap behave similarly to their past appearances; they slowly hover through the air and are impervious to all Sword attacks while in flight. Unlike past incarnations, however, Peahats never stop to rest. Using the Gust Jar, it is possible to drag them out of the air; a Peahat stuck to the Jar can be expelled and killed as it crashes into an obstacle. It is also possible to use the Boomerang to stun them, which will slice off their flower propeller blades. The Peahat will then hop around for a short time after regaining consciousness, and will eventually regrow its flowers if left alone. Peahats can also be dispatched with one Arrow. They appear frequently on Mount Crenel.

A much more aggressive variety that carries Bombs also appears at Veil Falls. These Peahats fly much higher in the air and carry the Bombs beneath them. After swarming around Link, they will drop their Bombs, after which they will flutter close to the ground and attempt to slam into him. They can then return to the air and produce another Bomb. These Peahats are vulnerable only when they are close to the ground; however, they are still impervious to the Sword, and the Gust Jar and Boomerang will have no effect on them. Instead, these Peahats can only be defeated by shooting an Arrow at them.

Peahats in Twilight Princess resemble plants with thick roots that form a sac-like shape. They are harmless, providing transportation for Link by allowing him to grapple onto their roots with the Clawshot. Some fly in a predetermined path, and may be used to carry Link over short distances, while others hover in place. Strings of Peahats can be grappled between one another with the Double Clawshots, acting as a bridge between one area and the next. Peahats are able to support Link's weight, but will begin to descend if he is wearing the Iron Boots. These Peahats are important in navigating the City in the Sky and during the battle with Argorok.

Peahats in Skyward Sword appear as benevolent Clawshots targets, as they did in Twilight Princess. They resemble plant bulbs that fly using their flower heads. Submerged Peahats can also be found buried underground or underwater in certain areas, and can have their petals activated by using the Whip.

Peahats in A Link Between Worlds resemble bulbous flying plants that appear only during the Boss battle against Zaganaga. The Boss releases spawns of Peahats, which swiftly swarm after Link; however, unlike their previous incarnations, they can be dispatched even during mid-flight.

In Zelda's Adventure, Peahats act more like Octoroks than their canonical kin. They never fly, instead opting to wander around in small groups on the ground. They have also developed the ability to shoot seeds. Early in the game, when Zelda's life meter is low, they are among the most dangerous enemies as they have high resilience and usually travel in groups of two to six members. However, once Zelda has obtained the Magic Shield, she will be able to block their projectile attacks, making them easier to defeat.

Peahats appear in Oocca Target Practice and Gerudo Moldorm: Defender in Link's Crossbow Training. Although the main objective of the Oocca Target Practice Stage is the shoot the targets carried by Oocca, the Peahats in the background may also be shot, which will cause them to descend slightly and give Link one point each time they are shot. Shooting them with Exploding Arrows, however, will completely destroy them and will grant 100 points. The very last one that appears will reveal a red Fairy worth 1,000 points if it is destroyed with a Exploding Arrow.

In Super Smash Bros. for Nintendo 3DS, Peahats and their Larvae from Ocarina of Time appear as enemies in the Smash Run mode. They also appear as a Trophy.

Peahats appear as enemies in Cadence of Hyrule, where they move to the beat of the music. They are largely stationary enemies but will fly away when Cadence, Link, Yves, or Zelda gets too close for their liking. Before flying, the propeller on the top of their bodies will start to slowly spin, getting faster as they approach. Upon being approached, they will fly up and move on every other beat in any direction, including diagonal. Then, they will fly for several beats before returning to the ground to rest.