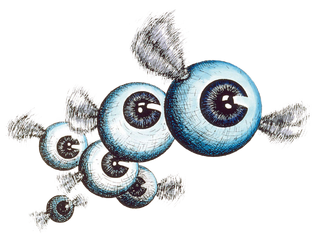 Patras are recurring Bosses in The Legend of Zelda series.[1]

Several groups of Patras appear throughout Level-9 in both the First Quest and the Second Quest. Patras are flying eyeballs with wings that are always found in a circular shaped group with a larger Patra in the center. Patra groups come in two types of formations.[2] While both types have the smaller Patras flying in a continuous circle, one type periodically expands and contracts across the room, while the other type rotates like a gyroscope. Link cannot damage the Patra in the center until he has defeated all eight of the smaller Patras that circle it. Each smaller Patra has 6 health and the larger Patra has 11 health, totaling the entire group at 59 health. Patras are only vulnerable to Swords and physical hits from Magical Rod. When defeated, the large Patra may drop either a Heart, a Fairy or one Rupee.[note 1]

Some Patras briefly appear in the "Stinging a Stinger" episode of The Legend of Zelda TV series. When Link hears Princess Zelda's screams, he rushes over to where she is and sees that she is being attacked by Patras.[4] Link, confident about his new Sword, faces an incoming Patra, but one light-beam from the foe breaks the Sword in half and causes Link to collapse from the attack. Zelda then rushes towards Link and swiftly scares the Patras off.[5]

Patra appears in the To the First Power story of The Legend of Zelda comics by Valiant Comics. While Princess Zelda is busy fighting a Gohma in Level 1, a group of Patras fly in and attack her. Although the Princess is successful in defeating one of them, she admits that the fight has gotten too tough for her and manages to escape the room.[citation needed]

Patras appear in BS The Legend of Zelda. A group of Patras can be found in Level-5, Level-7 and Level-8. They spin around continuously.