Not to be confused with Parry Attack, an ability used in The Wind Waker. 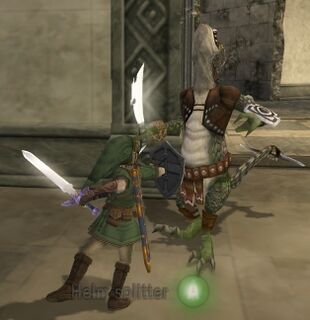 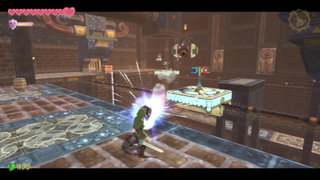 Breaking past an Enemy's defenses[2]

The Parry,(BotW)[3] also known as the Shield Attack,(TP)[4] and the Shield Bash,(SS)[5] is a recurring ability in The Legend of Zelda series.

To perform the Shield Attack on the GameCube version, Link must get close enough to the enemy while targeting it and then press the R-Button, which will cause the enemy to lower its defense and thus allow Link to attack the foe with another skill, such as the Helm Splitter.[8][2] In the Wii version of Twilight Princess, this Hidden Skill can be executed by thrusting the Nunchuk forward.[9]

Other than bringing the enemy's defenses down, the Shield Attack can also be used to deflect certain enemy projectiles.[9][10]

Link can learn the Shield Bash ability after first acquiring a Shield.[11] The Knight Commander, Eagus teaches Link this ability at the Sparring Hall.[12] To perform the Shield Bash, Link must ready his Shield right before an enemy attacks him. The force from his Shield arm will repel the enemy's attack.[13] The Shield Bash gives Link an opening to strike his opponent.[5] The technique is useful against enemies who throw weapons or refuse to give an opening.[14] Using the Shield Bash to parry an attack requires perfect timing in battle.[15] Link can practice this ability on the Defense-Practice Log in the Sparring Hall.[16]

Link can Parry by readying his Shield and pressing the A button in Breath of the Wild. By Parrying at the right time, Link can execute a Perfect Guard, which will unbalance Enemies and redirect projectiles.