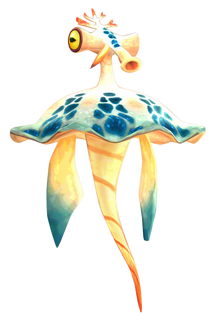 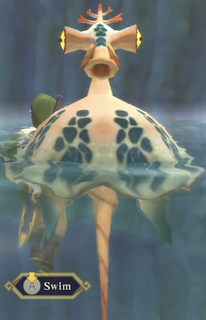 The Parella,[2] also known as the Parella Tribe,[3] are a race in Skyward Sword. They are a race of aquatic creatures who live in Lake Floria of the Faron Province.

The Parella appear to be a mix of a seahorse and a jellyfish, containing the head and tail of a seahorse and the body of a jellyfish. On their heads are crests that resemble coral. They live solely in the waters of Lake Floria in southeastern Faron Province. Despite their unusual appearance and their seemingly lack of swimming fins, they are highly accomplished swimmers who can swim great distances without tiring. The Parella are invertebrates; due to their lack of bones, they can easily fit into confined spaces that Link cannot.[4] Parella are nearly always white with blue markings, with the exception of Jellyf, who is red. It is very common for Parella to not have individual names.[5] The Parella rarely leave the cave where they live alongside Faron, but they are curious about what lies in Faron Woods.[6]

The Parella serve the Water Dragon Faron,[7] calling her "Her Excellence",[8] and are in turn protected by her guardianship over the Province.

The Parella were among the five races of the Surface who joined the Goddess Hylia in the war against the evil forces of Demise. During the Sky Era, the Parella live in the flooded channels of Lake Floria, where they serve the Water Dragon Faron. The Parella are also led by Jellyf.[9]

While searching for Farore's Flame, Link is directed to Lake Floria to look for the Water Dragon Faron, who knows the whereabouts of this Sacred Flame. There he encounters Jellyf and the Parella, who are all afraid to discover another human in their domain.[10][11] After Link chases after Jellyf, she relaxes after seeing the Water Dragon's Scale in his possession, realizing that he is a messenger of the Goddess.[12] Link learns that Ghirahim had invaded the Lake and attacked Faron with his horde of monsters, managing to wound her in the process.[13][14] The Water Dragon is now in a state of recovery, but is running out of Sacred Water needed for her recovery. Jellyf implores that Link help Faron, and guides him through the flooded channels to her dwelling. Along the way, Link also meets other Parella, some of which mock him for his form unsuitable for swimming.[15][16]

"Parella" may be a portmanteau of "parasol" and "umbrella," indicative of their body shape. Their Japanese name, Parage, is likely derived from the Japanese word for jellyfish, 海月 (Kurage).