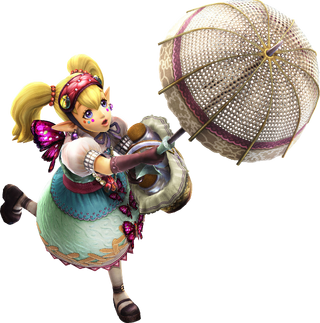 Defeating enemies
The Parasol is a class of Weapon used by Agitha in Hyrule Warriors.[name reference needed] It is associated with Light. The Parasol, along with her basket containing an assortment of collected bugs in Bottles, allows Agitha to summon gusts of wind as well as several Golden Bugs as part of her moveset. The Bugs that appear include Golden Butterflies and Golden Beetles.

The Lv.★ form of the Parasol is the 8-Bit Rupee, which is modeled after the Blue Rupee from The Legend of Zelda. The basket that Agitha carries is also filled with Blue Rupees. It was added to Hyrule Warriors with the Twilight Princess Pack DLC. In Hyrule Warriors: Definitive Edition, instead of appearing as a separate Weapon, the 8-Bit Rupee replaces the Incandescent Parasol when the "8-Bit Weapons" Setting is turned on in Game Settings within the Settings menu.

In Hyrule Warriors Legends and Hyrule Warriors: Definitive Edition, the fourth form of the Parasol is the Incandescent Parasol, which is associated with both the Elements of Light and Fire.

Agitha floats into the air with the wings on the back of her dress transformed into gigantic Golden Butterfly wings. With a giggle, she gives the wings a mighty flap, blowing out a column of swirling air in front of her, then drops to the ground. This attack deals damage in a wedge-shaped region ahead of Agitha, and carries no Element.[verification needed]